A Battle Of Epic Proportions

Who Is The Greatest Dutch Heavyweight Kickboxer Right Now? 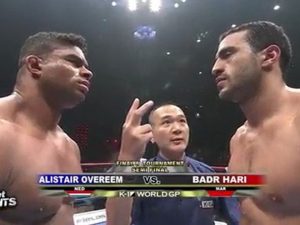 There’s something in the air…. it seems a bit like back in the day when the K-1 World Grand Prix was the Formula 1 of Kickboxing, and you had butterflies in your stomach days before the Final 8 events. All roads lead to the Dome…. remember?!

Fans are eagerly awaiting the match up between Alistair “The Demolition Man” Overeem, or “Reem” as he is also nicknamed and Badr “Bad Boy” Hari on Saturday at Glory Kickboxing’s Collision 4 event. And there are reasons for that. Several.

It’s a global super fight – a fight with global attention. It’s a clash of dynasties – a fight that just begs for cliches. Two of the biggest, literally, Kickboxing Heavyweights squaring off….. for the third time. In 14 years!

Badr Hari is a purebred Kickboxer whereas Alistair Overeem has been all over the place.
Overeem started out as a Kickboxer but quickly turned into a MMA fighter. This was in a time when MMA in Holland was referred to as Free Fighting. Overeem went on to fight under MMA rules for DREAM, Strikeforce, PRIDE FC, UFC, RINGS and M-1. But from 2001 until 2010 he flirted with Kickboxing under the K-1 banner, whilst fighting actively and regularly in MMA too. You could almost say that Kickboxing was his hobby. Professional Heavyweight Kickboxing that is. And professional Heavyweight MMA was his profession.

Fast forward, almost 12 years and Overeem is fighting under Kickboxing rules again. In his home country. Against a guy who’s been fighting the best Heavyweight Kickboxers on the planet for the last 20 years.

It’s a fight of truly epic proportions: the warriors have almost developed a relationship. A relationship which at first looked like it was off to a bad start…… based on hate…. or hardcore competitiveness. But over the years both guys have matured, and have developed respect and love for each other. Like two brothers.
This was clear when both guys Zoom’ed in (pun intended) to Ariel Helwani’s The MMA Hour the other day: both guys talked with a calmness and clear, professional respect for one another. The word love was even thrown around several times. Helwani was baffled. So was I. And maybe the entire global Kickboxing world. Most people were expecting a more heated exchange of words.

But these guys never seize to amaze: true warriors, calm, collected, humble, respectful and just carrying themselves the way a real fighter does.

The MMA Hour with Ariel Helwani

But there IS competitiveness. Make no mistake about it. A lot is on the line: both fighters want to be remembered as the greatest, the GOAT, coming out of Holland.
Overeem is by far the best Mixed Martial Arts fighter to come out of the land of wooden crocs, but he is definitely up there among the top Kickboxers from Holland too. NO doubt about that. And with his departure from the UFC, and his desire to fight still intact, he is tasting blood – seeing a new opportunity. An opportunity to prolong his career, and keep doing what he loves. And is extremely good at. I think we all get that and appreciate that.

On the other hand we have Hari. A world class fighter who has looked emotionally unstable over quite a few years. This is in no way meant as bashing or hatred towards the elite fighter. But when you look at the incidents, accidents and controversy surrounding a lot of his recent fights, one cannot help but think that it just looks like Hari wants to get out of the ring as soon as possible.

So Hari will be looking to solidify his place as one of the greatest – maybe even leaving on a high note?

Even the legendary founder of Chakuriki is involved

We’ve profiled Hari earlier on FIGHT SPORTS, and will be publishing results as they happen Saturday night. And as I’m writing this article Overeem just contacted me and said that “things are hectic” and that he will be doing an interview with us after his mega fight with Hari.

Now bring on the event which could have been called “All roads lead to GelreDome.