Anderson Silva vs Logan Paul – There Is Rumors About Potential Fight

A few days ago, rumor has spread that The Legend, Former UFC middleweight champion Anderson “The Spider” Silva, and Celebrity and YouTube star/Professional Fighter Logan Paul are going to fight.

Dillon Danis stored the screenshot, where Viktor Doria is offering him to fight at the card, which’s the main event is going to be Anderson Silva vs Logan Paul bout. The Store on Instagram was with an inscription:
“So Funny they talk shit but follow and DM me, such losers”. 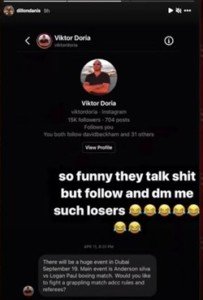 That Gossip has become more real after Paul’s Manager Jeff Levin talked with ESPN. As he said the details are not finalized yet, but they are working on this bout and want to make it happen later this year.
Paul last graced the ring with Floyd “Money” Mayweather Jr. in an eight-round exhibition bout. It was the fight, which sold around a million pay-per-views and had no official winner.

After cutting from the UFC, The Spider tried his skills in the boxing bout against Julio Cesar Chavez Jr. Even at the age of 46, Anderson Silva showed fans the moves, which made him so popular. He managed to win against former WBC middleweight champion via split decision. After that fight, Silva said that he liked Paul’s brothers and expressed a desire of having business with them. This should come as no surprise because the Paul brothers are the money fight now and 46 years old veterans do not have much time left on the ring.

Ramla Ali Opens Up About Pausing Her Pro Career For Olympics

All Eyes On George Kambosos Jr. As Teofimo Lopez, Triller Waits For Him To Agree To…

Gennady Golovkin Vs. Ryota Murata Might Take Place On December 28

Nick Diaz Doesn’t Really Like Fighting, But Would Want To Face Leon Edwards Instead

Lopez Agrees To Move Fight; Adesanya Will Never Fight In New Zealand and Jones Might Get Pay Bump