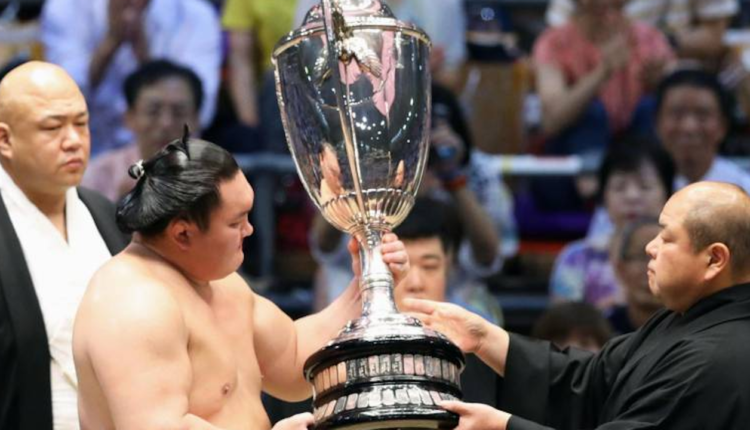 Another Championship for Hakuho

The 2017 Nagoya Grand Sumo Tournament was certainly one to remember for the legendary yokozuna Hakuho. Not only did he break the all-time record for career wins, but he extended his sumo championship record by winning the tournament for his 39th title.

Hakuho just needed to win on the final day of the basho for the championship, and he did just that. Hakuho defeated Harumafuji to finish at the top of the tournament standings with a 14-1 record.

“I lost on the 11th day, but the way I turned back the tide after that was in my head so I was able to get in the ring relaxed today,” Hakuho said. “To be able to break [former ozeki] Kaio’s 1,047 [career wins] record and [yokozuna legend] Chiyonofuji’s 1,045 mark at the same tournament is gratifying. I’d like to go back to my hometown and rest up tomorrow, but the thing in my head right now is (the next goal of) 1,000 wins in makuuchi [the top division].”

No. 8 maegashira Aoiyama finished just one win behind Hakuho, but he was also rewarded for his efforts. Aoiyama was given the Fighting Spirit Prize, one of three awards the Japan Sumo Association gives to a tournament’s standout performers.

Sekiwake debutant Mitakeumi, who handed Hakuho his only loss of this tournament, was given Outstanding Performance Prize by the JSA. This is the second tournament in a row Mitakeumi has been given the honor.

“I didn’t think I would be able to win this award twice in a row so I am pleased,” said Mitakeumi. “It was good that I was able to wrestle my brand of sumo at this tournament, win on the last day and also get a victory against Hakuho.”