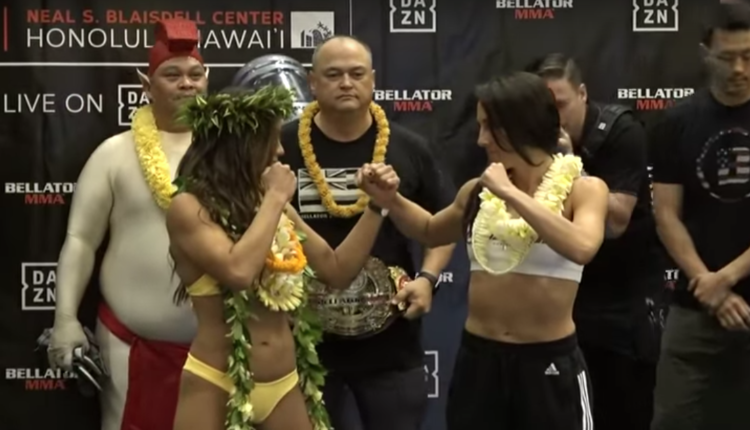 All of the 8-0 Macfarlane’s professional bouts except her pro debut have come in the Bellator cage — where she’s picked up finishes of Amber Tackett and Jessica Middleton before defeating Emily Ducote in their second encounter to become the promotion’s inaugural 125-pound women’s champion at Bellator 186 in November 2017. She successfully retained the title with a third-round submission against Alejandra Lara at Bellator 201 back in June.

Letourneau, after a 5-3 start to her career, joined the UFC as part of the 18th season of The Ultimate Fighter. After joining the main roster, she won three straight before a failed strawweight title bid against Joanna Jedrzejczyk at UFC 193. Letourneau then lost the next two bouts and was released by the UFC. Signing with Bellator in April 2017, Letourneau defeated Kate Jackson at Bellator 191 and Kristina Williams at Bellator 201 en route to this title fight.

The co-main event will mark the Bellator debut of former UFC light heavyweight champion Lyoto Machida, as he faces former Bellator middleweight champion Rafael Carvalho. Machida won his last two bouts with the UFC before leaving the promotion — a controversial decision win against Eryk Anders in February and a second-round knockout of Vitor Belfort at UFC 224. This will be Carvalho’s first bout since losing the Bellator title to Gegard Mousasi at Bellator 200 back in May.