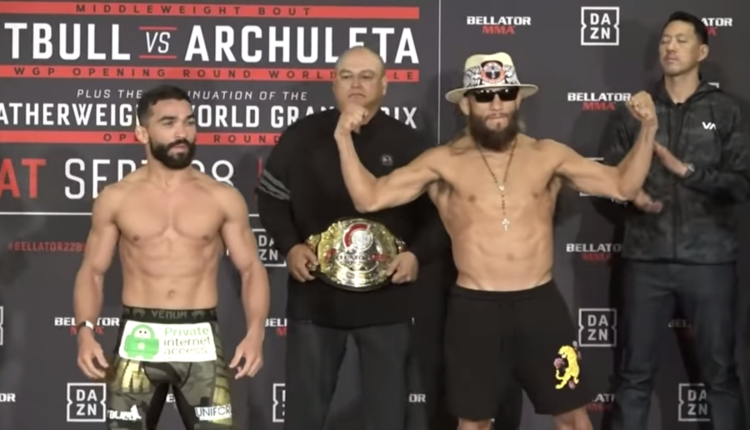 A rematch of two MMA legends and the second half of the Bellator Featherweight Grand Prix’s opening round surrounds Bellator 228, which takes place at The Forum in Inglewood, California.

The featured attraction will be the final first-round contest of the Featherweight Grand Prix, which will see Patricio “Pitbull” Freire defend the Bellator featherweight championship against Juan Archuleta.

“Pitbull” is currently in his second reign as Bellator’s 145-pound champion, defeating Daniel Straus at Bellator 175 in April 2017. He made successful defenses against Daniel Weichel and Emmanuel Sanchez before challenging Michael Chandler for the Bellator lightweight championship at Bellator 221 in May. He finished Chandler in 61 seconds and became Bellator’s second simultaneous two-division champion.

Archuleta has been nearly perfect since his MMA debut in August 2013, losing just once in his 24 career fights thus far. He’s been practically unstoppable in Bellator since his promotional debut at Bellator 195 in March 2018, and in his most recent fight at Bellator 222 in June, he scored a big knockout of former Bellator bantamweight champion Eduardo “Dudu” Dantas.

The other first-round tournament fights on this card include unbeaten top prospect A.J. McKee facing Georgi Karakhanyan, former bantamweight champ Darrion Caldwell taking on Henry Corrales and former featherweight champ Daniel Weichel facing Saul Rogers. After all the tournament fights have been completed, a lottery will be held to determine the quarterfinal matchups.

Machida came on hard times after the win, losing four of his next five, including a middleweight title fight at UFC 175, and earning an 18-month suspension from USADA after testing positive for a banned substance. Mousasi has since claimed Machida cheated in their fight and he has attacked Machida for his USADA suspension between 2015 and 2017.

Machida did manage to win two bouts in 2018 before moving on to Bellator, defeating Rafael Carvalho at Bellator 213 before finishing Chanel Sonnen at Bellator 222.

After the loss to Machida, Mousasi won eight of 10, including his final five consecutive fights in the Octagon. He was the No. 4 ranked middleweight contender when he jumped ship to Bellator in July 2017. After a controversial win over Alexander Shlemenko in his Bellator debut, Mousasi finished Rafael Carvalho at Bellator 200 to claim the middleweight championship. He made one successful title defense against welterweight champ Rory MacDonald before being upset for the belt by Rafael Lovato Jr. back in June at Bellator London.

FIGHT SPORTS brings you the latest from Bellator 228!

Joshua: Me vs. Fury Would Be Massive