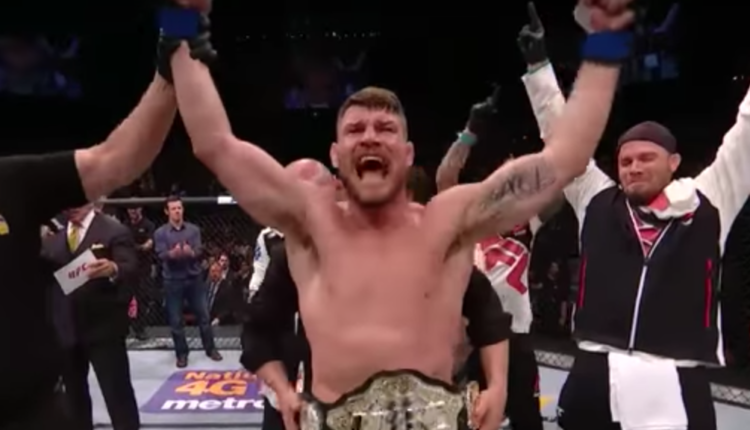 Israel Adesanya is looking to be the next star of the UFC and will get his chance at UFC 234 against former middleweight champion Anderson Silva.

Yet, not everyone is willing to crown Adesanya the next “golden child” of the Octagon, as Michael Bisping thinks Anderson Silva will be very game come February 10th in Melbourne.

“Israel is an entertaining guy,” said Bisping. “He was talking about the fight with Anderson and how he looks up to him and he doesn’t want to kill his hero but that’s what he’s gonna try and do. I don’t know if it’s that simple. Anderson is very capable and Israel said as much. . .

“We’ll see what happens. I think Anderson knows his back is up against the wall. For him to have any kind of career after this fight, he has to win this fight, he has to look good. Of course, he had the whole thing with steroids as well, so Anderson has a lot to prove right now. So I wouldn’t be running out there and putting the money on Israel Adesanya just yet.”

Even with Adesanya’s impressive run since moving from kickboxing to MMA, Bisping feels that if he returned to action, Adesanya would be an easy matchup for him.

“I like Israel Adesanya but I’ll tell you something, if there’s one person if you asked me who I want to fight right now, it would be Israel,” Bisping said. “When I look at him – listen, he’s good, he’s great, but I’m sorry, I’m not buying it. I’m not saying I’m not impressed. I’m on the hype train. He’s good, he’s beating people. He’s beating the Marvin Vettoris of the world. He had a good win against Derek Brunson but Derek Brunson looked like sh*t. He was terrified.

“I think I would have an easy time with him. Just saying, just throwing it out there.”

“He fought Derek Brunson and I thought Derek Brunson was going to give him a hard time but he made easy work of him,” Bisping concluded. “But Derek Brunson looked like sh*t. So now he’s fighting Anderson Silva and if he beats him – and it’s not fair to Israel – people will say, ‘Yeah, but he beat a 43-year-old Anderson Silva.’ It is a tricky one and it’s kind of a lose-lose because if beats him, he’ll get that, and if he loses, he got beat by a 43-year-old Anderson Silva. Fact of the matter is, he deserves the hype. He’s very exciting, he looks good, he fights with an exciting style, he’s entertaining on the microphone, inside the cage, outside I’m on the hype train, I think he’s great. I’m only saying I want to fight him from a competitive standpoint.”

Sherazadishvili Dedicates Win to His Father