A fight announcement Friday afternoon shocked the boxing world when Manny Pacquiao posted a fight poster on Twitter to serve as an announcement for an Aug. 21 clash with Errol Spence Jr. Spence Jr. and Pacquiao came to an agreement for a welterweight unification bout on August 21 in Las Vegas. The venue hasn’t been decided.

Spence is the IBF and WBC welterweight champion, while Pacquiao holds the status as the WBA “champion in recess.” The 42-year-old Pacquiao hasn’t fought since beating Keith Thurman in the summer of 2019 has a record of 62-7-2 with 39 KOs. Spence is 27-0 with 21 knockouts, retained the WBC and IBF belts in December with a victory over Danny Garcia. 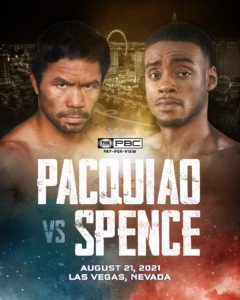 Caleb Plant Confident Canelo Alvarez Fight Will Be Made

Ahead of Elbir Fight, Chris Eubank Jr. Explains How Brother’s Death Took A Toll On…

Ahead of Elbir Fight, Chris Eubank Jr. Explains How Brother’s Death Took A Toll On Him

Nate Diaz, Vicente Luque To The Octagon? Diaz Responds To Luque’s Call Out