Buakaw Is “Heart And Soul” Of All Star Fight 4

On May 21st, All Star Fight brings Buakaw Banchamek to Hong Kong, as he faces off with Victor Nagbe in the evening’s main event. 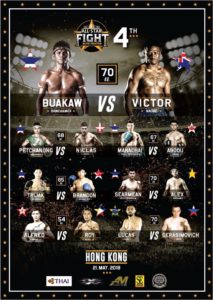 In an exclusive conversation with FIGHT SPORTS, Buakaw claimed that after he defeated Luis Passos at All Star Fight 3, he and his team have been working on a new strategy in-order to defeat Nagbe. Buakaw claimed that he had to “manage” each fight against his opponent’s style.

While Buakaw is considered to be a legend in Muay Thai, he took time away from the sport to pursue an academic interest and attend university. While at the university, the fighter would take his athletic abilities on to the football pitch, and become a member of his university’s team. When asked the difference between being an individual fighter and being a teammate, he claimed that he liked football because it was “more relaxed” and was “less pressure” to be on a team as compared to being the “heart and soul” of All Star Fight.

But the pressure and the spotlight led the fighter back into the ring, and back against Nagbe, whom he defeated in 2014.

Buakaw has kept active with his fight with Nagbe being his 15th in two years. The popular fighter loves to keep busy, telling FIGHT SPORTS he hopes to fight at least three to four more times in 2018, for a total of eight, one less than the nine fights he had in 2014.

Before Buakaw Banchamek has his rematch against Victor Nagbe, here are FIVE things you didn’t know about the All Star Fight’s main event attraction. ——————————————- #kickboxing #buakaw #muaythai #issan #somtum

Pacquaio: Matthysse May Be My Last Fight

Nick Diaz Doesn’t Really Like Fighting, But Would Want To Face Leon Edwards Instead

Lopez Agrees To Move Fight; Adesanya Will Never Fight In New Zealand and Jones Might Get Pay Bump