For his preparation he looked to Muay Boran to up his defensive game. 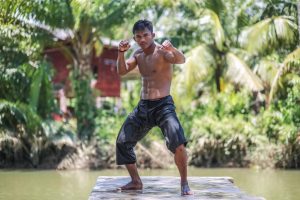 Muay Thai Chaiya or Muay Chaiya is one of the styles of Muay Boran, witch originates from southern Thailand. It is considered one of the ‘mother styles’ to modern day Muay Thai. 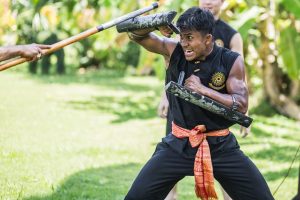 The characteristics of Muay Thai Chaiya are:

1. Low Level Kicks and Attacks
The style is characterized by low level kicks, with short precise trajectories. Smooth and effective defensive moves and counter striking with the arms, are also a major characteristic of this style.
Attacking the opponent’s legs quickly and causing as much damage as possible is key in this style. 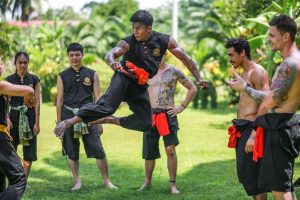 2. Self Defence Focus
Muay Thai Chaiya is also known as the Durian fruit style, as the blocks and parries (mostly with the elbows but also with the forearms), resembles the many protruding and harmful spikes on the Durian fruit – an old philosophical saying is “Become a Durian fruit”.

The focus of Chaiya is to develop a dangerous defence, which hurts your opponents with solid blocks using arms, knees and elbows.
When you strike a Muay Chaiya fighter, the only targets in range are his shins and elbows which is obviously very painful and damaging to the hands, arms and wrists.
The sport focus of modern Muay Thai is totally different to that of the Chaiya style, which focuses on real life or death self defence techniques. This includes the use of deadly joint-locks as well as weapons defence. 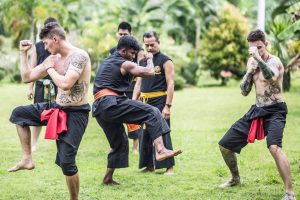 3. Stance and Footwork Focus
In Muay Thai Chaiya a heavy emphasis is placed on the fundamentals of stance and footwork. These basic movements are practised over and over and over again until they become second nature. 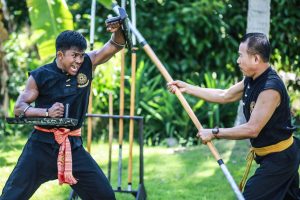 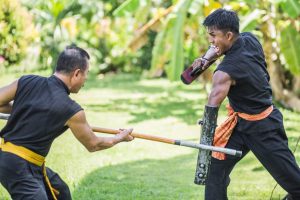 5. Using the Opponent’s Energy
Diverting, deflecting and shifting angles allows the Chaiya practitioner to efficiently block and divert an opponent’s attack to be able to strike back.
For high level Chaiya practitioners using the energy of the opponent so they hurt themselves is key. This is done by using the strongest bones in the body for blocking attacks. 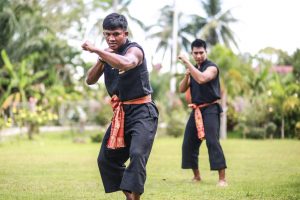 6. Strength and Toughness Is Not the Focus
In comparison with modern day Muay Thai where emphasis is placed on physical conditioning, strength, power and toughness, Chaiya is solely focussed on finishing a fight as quickly as possible.
Finishing the fight as quickly as possible also means taking very little damage due to the excellent defence, foot stance, pivoting and counter striking.

All pictures courtesy of Banchamek Gym unless otherwise stated.

Where To Watch: Andy Ruiz Jr Vs. Luis Ortiz Tonight