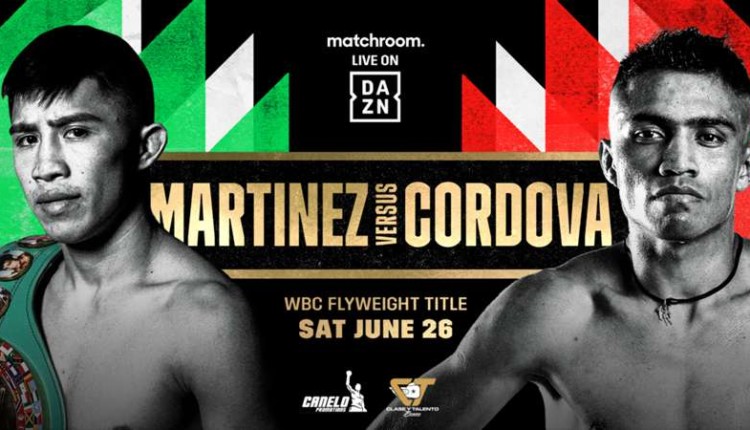 The series commences on June 26 and airs live on DAZN.

Matchroom Boxing and DAZN have announced a series of fight nights live from Mexico in partnership with Canelo Alvarez and Canelo Promotions as well as Eddy Reynoso and Clase y Talento.The first event in the new four-part Mexico series will see Julio Cesar Martinez defend his WBC flyweight title against Joel Cordova at the Domo Alcade, Gigantes de Jalisco Arena in Guadalajara, Mexico on Saturday, June 26.

This follows on from DAZN and Matchroom’s game-changing five-year global deal announced last week underscoring a renewed, long-term investment by DAZN and Matchroom to take boxing to new global heights in countries around the world.

The June 26 fight night, as well as all three events from Mexico to follow over the next year, are in addition to DAZN’s current global boxing schedule and will all be broadcast live worldwide on DAZN. The broadcasts will be available in both English and Spanish, with the latter led by a dedicated on-air talent roster that will soon be unveiled.

“This is a great chance for Mexican fighters to follow their dreams,” said Canelo of the deal. “Sometimes our champions have to travel internationally to defend their belts and land opportunities. We plan on providing those opportunities in Mexico and giving young fighters the chance to develop and change their lives.”

Matchroom chief Eddie Hearn said: “This is such an exciting project and partnership, and I can’t wait to get started on June 26 and add even more action to the DAZN global schedule.

“It’s no secret that Mexico is blessed with boxing talent and passionate fans that truly embrace the sport. This new project will breathe new life into the sport in Mexico and give young fighters and champions the opportunity to flourish.”

Don’t expect Nate Diaz to retire from MMA Ever

Timothy Bradley Jr, Carl Froch To Be Inducted In Boxing Hall Of Fame

Who is Ryan Garcia’s Tune Up Fight Against Before Gervonta Davis Showdown?