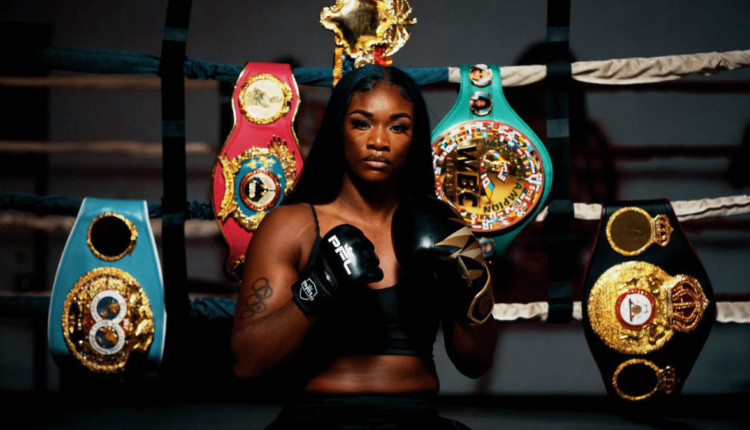 Claressa Shields: Boxing can’t make me a Millionaire and Household Name, MMA Can!

Claressa Shields is already a Phenom, being the only athlete (across genders) to have held all four major boxing world titles simultaneously and in two weight classes too!

The 26-year-old boxer from Michigan held the WBA, WBC, IBF and WBO boxing titles simultaneously, highlighting her credentials as a high level athlete with top-notch striking prowess. However, the MMA is a different ball game entirely.

Unhappy about the hard-handed structural issues she faced in pro boxing including a difficult fan base and her fights being greenlighted by network executives, the two-time Olympic gold medalist and multiple-weight titleholder has decided to delve into the world of mixed martial arts.

Apparently, it’s all about fame and money. Getting to the same level of fame and payday the likes of Amanda Nunes, Holly Holm and Ronda Rousey enjoy.

Despite her achievements in boxing (including boasting a record of 11-0, 2 KOs), Shields is disappointed that she is nowhere near the “household name” and 7-figure earnings she deserves. June 10th, 2021 is set to be the beginning of a new journey to achieving these objectives.

In a recent interview with MMAFighting, Shields said:

Shields had earlier this year launched a pay-per-view debut event, fighting against Marie-Eve Dicaire, in an attempt to secure a huge payday and bridge a perceived pay disparity in male and female boxing. Judging by her comments, it obviously didn’t work out for her as she had expected.

“In women’s boxing, women don’t get paid that much. I’ve won every title you can think of, every last organization. Three-time division world champ, two-time undisputed champ at 154 and 160 [pounds]. I’ve held titles at 168 and it’s like I’m not a millionaire. I’m known worldwide but I’m not a household name yet.”

Shields appears resigned about any hopes of making more headway in boxing, seeming more dedicated to making a name and payday for herself in the more competitive and cutting-edge female combat sports, MMA.

“There’s nothing more I can do in women’s boxing to make me a household name cause I’ve done everything. Nothing else I can do.”

Female UFC fighter, Sijara Eubanks however does not believe Shields would enjoy a straightforward success in MMA. In a recent interview with Sportskeeda MMA, Eubanks said:

“The style of boxing vs striking in MMA are two very different styles. So, she’s gonna have to transition there. If they rush her and give her someone to soon, she’s gonna get smashed to the ground.”