The Collision 4 Weigh-Ins And Press Conference Have Just Finished

All fighters made weight for tomorrow’s colossal event, Glory Collision 4 at the GelreDome in Arnhem, The Netherlands.

The fight that has the Kickboxing world buzzing again, is of course the Alistair Overeem vs. Badr Hari trilogy.

Both fighters appeared mellow and even hugged each other after the usual stare down.

Overeem called out Glory Kickboxing and current Heavyweight champion Rico Verhoeven for not stepping up, and fighting him (Overeem) for the title. Overeem lashed out and said that Verhoeven would rather do his own thing, “Dancing with the stars, or whatever it is called.” 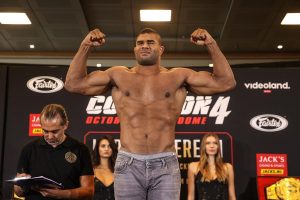 Overeem is referring to Verhoeven’s own upcoming event HIT IT, which is an event combining live acts (music and dancers) and a few Kickboxing fights. Verhoeven fights Gerges for the fourth time at this event: a fight most think is redundant, since Verhoeven has won all their three encounters. 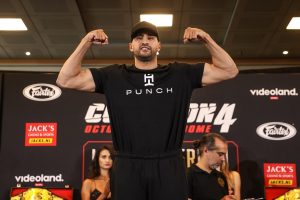 All pictures courtesy of Glory Kickboxing.