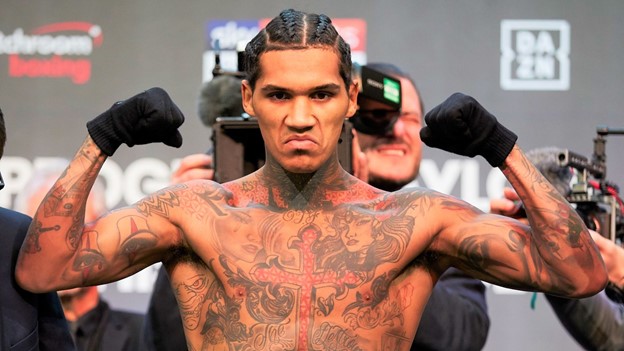 Conor Benn, the 25-year-old who is the son of boxing legend Nigel Benn, will look to extend his unbeaten streak this weekend when he shares the ring with Chris Algieri (25-3, 9 KOs).  The Benn vs Algieri bout will serve as the co-main event with Katie Taylor and Firuza Sharipova’s fight in Liverpool.

Benn (19-0 12 KOs) will challenge the major honors at welterweight if he beats the ex-world champion.

Algieri, 37, had the privilege of sharing the ring with the likes of Manny Pacquiao, Errol Spence Jr., Amir Khan and more boxing aces early in his career.

Speaking of his early days in the sport, Algieri told ESPN: “Back then I was younger and dumber. Now, I’m smarter and a lot more physically stronger. I’m more comfortable in the ring now than I was when I fought those guys.”

The New York native clarified that he is not thinking of retirement at the moment.

“I spar the young, tough kids and the drive is still there, so why not? I’ve always said that if I don’t see myself at the top, fighting the best, then I shouldn’t be doing it. I believe I can fight with the best, whether it’s at 140 or 147,” he said.

UFC Fighter Comes Out As Polygamist With Six Children