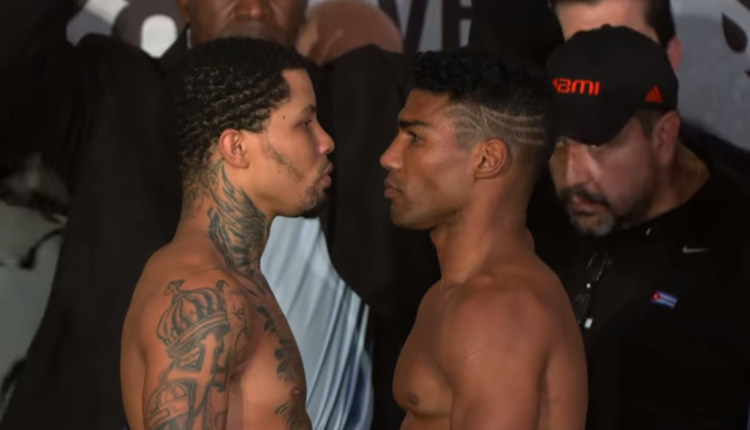 Gervonta Davis looks for success in a new weight class after two reigns as super featherweight champion, while Yuriorkis Gamboa looks for his first title fight win since 2013, as the two meet with the vacant WBA (Regular) lightweight championship on the line.

The undefeated “Tank” Davis has been a big knockout artist since first appearing on the professional scene in 2013, with all but one of his 22 fights thus far ending in KO/TKO. Davis won the IBF super featherweight championship by defeating Jose Pedraza in January 2017. He retained against Liam Walsh that May but lost the title prior to a win over Francisco Fonseca on the Floyd Mayweather vs. Conor McGregor undercard after failing to make weight.

Davis then won the WBA (Super) super featherweight title by defeating Jesus Cuellar in April 2018. He retained the title twice this year with quick knockouts of Hugo Ruiz and Ricardo Nunez.

Gamboa enters this contest on a four-fight win streak and 30 wins in 32 pro fights. He won the interim WBA featherweight championship in April 2009 before being promoted to WBA (Regular) champion later that year. After two successful title defenses, Gamboa defeated Orlando Salido in September 2010 to become WBA (Super) and IBF champion. He was stripped of both titles in 2011.

The co-featured attraction of the evening will feature Jean Pascal defending the WBA (Regular) light heavyweight championship against Badou Jack. Pascal pulled off a narrow technical decision upset of previously-unbeaten Marcus Browne in August to win the interim WBA title. He was promoted to “Regular” champion after Dimitry Bivol was promoted to WBA “Super” champion in October. Jack’s last fight came against Browne in January, a fight he lost after suffering what may be one of the nastiest cuts in modern boxing.

The main card action kicks off with former IBF super middleweight champion Jose Uzcategui, on a mission for a rematch with Caleb Plant, taking on Lionell Thompson.

For those in the Middle East and North Africa, Davis vs. Gamboa can be watched on the new FIGHT SPORTS MAX app! Please go to https://play.fightsportsmax.tv/create-account to create an account!

Fight fans in other areas, check your local listings for broadcast details. Or else keep it with FIGHT SPORTS for the latest results from the Davis vs. Gamboa card!

FIGHT SPORTS brings you live coverage of Davis vs. Gamboa!

Round 2: Davis doing a lot of targeting to the head early on in the second round. Sharp body shot by Davis and he is turned around. Right hand by Gamboa is missed. Double jab and a left and Gamboa goes down. Davis gets right back on the attack. He’s pressuring and attempting to get Gamboa in a corner. Davis working the left hand. Gamboa clinches up, and he seems to still be hurt. Davis fires a flurry and Gamboa clinches again. Davis with a big left uppercut. Davis goes upstairs once more before the bell.

Round 3: Referee has to force Gamboa’s corner out before the bell. Davis gets right on the attack, pressuring and getting the fight to the ropes briefly. Gamboa missed a straight to the body. Counter right by Gamboa gets Davis’ attention. Right hand by Gamboa. Gamboa flashing the left jab. Gamboa misses a right hand. Davis misses a left and Gamboa clinches again. Davis lands a couple of left hands. A couple of rights now by Davis. Gamboa with a counter left. Jab blocked by Gamboa, but Gamboa’s back is to the ropes. Now he’s in a corner. Davis lands a couple of rights.

Round 7: Left to the body by Gamboa doesn’t land. Davis blocks a left. Right to the body by Gamboa. Right hand by Gamboa followed by a clinch. A couple of weak lefts and a weak right by Gamboa. Hard left hand rocks Davis, and it results in some dirty boxing. Right hand by Davis. Gamboa’s back is to the ropes again. He comes in and some more dirty boxing, with a couple of lefts from Davis. One-two by Davis. Gamboa comes forward and charges to bring Davis’ back to the ropes and they have to be separated.

Round 8: Both men flash their left hands. Clinch near a corner. Left jab by Gamboa. Right hand by Gamboa. Gamboa pressing Davis against a corner again. A couple of left hands by Gamboa with Davis against the ropes. Right hand by Davis. Small combination by Gamboa. A clinch by Gamboa. Davis has barely thrown anything in the first two minutes of this round! Both men miss a left. Left hand to the body by Davis. Both men doing A LOT of missing. Davis gets a body shot. Davis gets a right uppercut. Left hand by Davis and Gamboa tastes the canvas once again!

Round 9: Davis with a right to the body. Jab by Davis. Jab by Gamboa. Gamboa lands a body shot and then a rabbit punch! Ref gives him a warning. Counter right jab by Davis. Another right by Davis. Gamboa trying to aim for the body and step in, but he ate some from Davis. Davis with a left hand. Another counter left by Davis. One-two by Gamboa. Gamboa with a body shot. Davis unloads and Gamboa takes him down. Gamboa corners Davis and clinches up with a couple of body shots. Right hand missed by Davis. Right to the body by Davis.

Round 10: Davis walking on the outside, dodging Gamboa’s punches. One-two by Davis. Another one-two. Gamboa lands a small combination upstairs. The pair get too in close and have to be separated. Right hand by Gamboa catches Davis off guard! But he can’t follow up with it. Left hands by Davis. A couple of right jabs from Davis. Left hand clips Gamboa before the end of the round.

Round 12: Combination by Davis early on, and Gamboa tries to get inside. He gets warned for hitting to the back of the head again. Gamboa trying to pressure Davis back and prevent him from punching. Uppercut and Gamboa is stunned! Left uppercut and Gamboa goes down once more! Ref waves it off!

Round 1: Jack coming forward and flashing the jab. Pascal, however, fires a jab of his own. The two circle around, each showing off their jab. Jack goes to the body. Pascal fires a three-punch combo. Pascal comes forward, and Jack is circling around. Big left hand lands for Pascal. Another jab by Pascal. Right hand to the body by Pascal, then one to the head. Right hand to the body by Jack. Jack misses a right. Jack lands a right to the head of Pascal. Left to the body by Pascal. Pascal throwing wild but he lands a couple to the body. Jack tries attacking inside. Jack misses a right. Left jab missed by Pascal. Pascal fires off a late flurry.

Round 2: Jack fires a left jab immediately. He misses a couple of left jabs, and Pascal answers with two of his own. Pascal with a left. Jack with a left upstairs. Jack feints and throws a right. Jack flashes his jab but misses a left uppercut. Pascal backs Jack up. Pascal lands a strong left hook. Left hand by Jack, Pascal fires back a one-two. Left hand to the body by Pascal. Pascal throws wildly again, but he’s connecting some, and it seems to be working. Jack tries to land inside and we’ve got some dirty boxing briefly. Pascal goes inside, and he’s warned for landing to the back of the head. Left hand by Pascal. Pascal throws a wild left hand and slips.

Round 3: One-two by Jack. A couple of lefts from Jack. Right hand by Pascal, but he misses a couple of big hooks. One-two by Jack is blocked. Pascal nearly lands a sharp counter left. A couple of small lefts by Jack. Left hand by Jack is blocked. Right hand by Pascal is missed. Pascal with a left hook to the head. Jack works the jab. Pascal catches Jack with a left to stumble him back some. Jack targets the body. Pascal fires off a body combination. Pascal backing Jack up with the left jab. Left hand missed by Jack. Right uppercut barely lands for Jack, and he misses the follow-ups. Right hand clips Pascal, and Jack comes forward, with Pascal holding on. Pascal coming forward, firing several combinations.

Round 4: A couple of lefts from Jack. The two go inside and have to get separated. Right hand by Jack and Pascal is covering up and backing up, with Jack trapping him in the corner. Pascal clinches to get out. The two firing away near the center in the fourth. One-two by Jack. Pascal with a couple of left hands. One-two by Pascal. A couple of left jabs from Pascal. Jack fires a right. Jack flashing the left jab as Pascal’s back is to the ropes. Pascal comes off with a combination. Left hand by Pascal. Left hand by Jack. Left by Pascal. A couple of right hands by Jack. Right uppercut by Jack, but Pascal fires a counterpunch and Jack is dropped! He gets up. Pascal tries to explode out of the gate, but the bell sounds!

Round 5: Pascal starting off with pressure. He fires a combination upstairs, and then fires shots to the body. Both fire a cross and Jack lands a short right uppercut. Jack lands inside and he backs Pascal up again to the ropes with his jabs. Pascal explodes again and his right backs Jack up, at one point getting Jack back to the ropes. Jack misses a left. Jack misses a couple of lefts. Left hook is partially blocked by Jack. Pascal goes inside. One-two by Jack is missed. Right hand by Jack doesn’t connect much. Pascal lands a one-two to the body. Pascal fires a combination inside. Pascal lands a counter right and fires off a flurry before the bell.

Round 8: Left hand by Pascal is missed. Jack misses a left. Jack misses a three-punch combination. Left hand to the body by Jack. Left hand by Pascal. One-two by Pascal. Jack blocks a straight to the head. Some dirty boxing, with both connecting with body shots. Pascal is rocked by Jack with a right hand. Jack is coming forward and he gets Pascal’s back to the ropes. Jack connects to the body, but Pascal is answering back! Uppercut by Pascal. Straight by Jack. Plenty of exchanging and circling in the closing seconds.

Round 12: Right hand right out of the gate by Pascal. One-two by Pascal. Left hand by Pascal. Jack connects with a right and Pascal is stunned! Jack fires off a flurry and traps Pascal in the corner. Jack fires off another flurry and Pascal goes down on the ropes! He gets up, but Jack comes back and Pascal tries to hold on! Jack gets Pascal’s back to the ropes. Jack continues to fire away on Pascal! Pascal clinches once more. Right cross by Jack. Some more clinching by Pascal to stop Jack’s attacks. Right uppercut by Jack. Left to the body by Pascal. One-two by Pascal. Right hand by Jack. Counter by Pascal. The two fire away in the center of the ring in the closing seconds.