DFS 16: The Invasion Of The Heavyweights 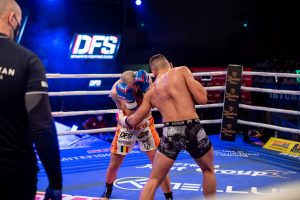 The promoter of  the Dynamite Fighting Show is Cătălin Moroșanu. He is a retired Romanian Kickboxer and professional rugby player, who is best known for his time in the Superkombat where he competed in the Heavyweight division. Moroșanu also competed for Local Kombat, K-1, Glory Kickboxing and his own show Dynamite Fighting Show.

The 38 year old Moroșanu is currently a politician and Kickboxing promoter, serving as president of the Dynamite Fighting Show.

On October 19th 2022 DFS 16 takes place at the Iași Multipurpose Hall in Romania after a three year absence.

The main event of the evening is a Kickboxing Heavyweight clash between Romanian Sebastian Cozmanca, 18 – 3 – 0 vs.  the Portuguese Bruno Susano, 93 – 14 – 2.

The event is entitled “The Invasion of the Heavyweights” and it is bringing back the gladiator Cristian Ristea for a super fight against Florin Matei from Bacău, who is the youngest national Olympic heavyweight boxing champion in the history of Romania.

Several other up-and-coming fighters are announced, and overall the show looks to be of decent quality enabling the European fighters to get some well deserved exposure on the bigger stage.