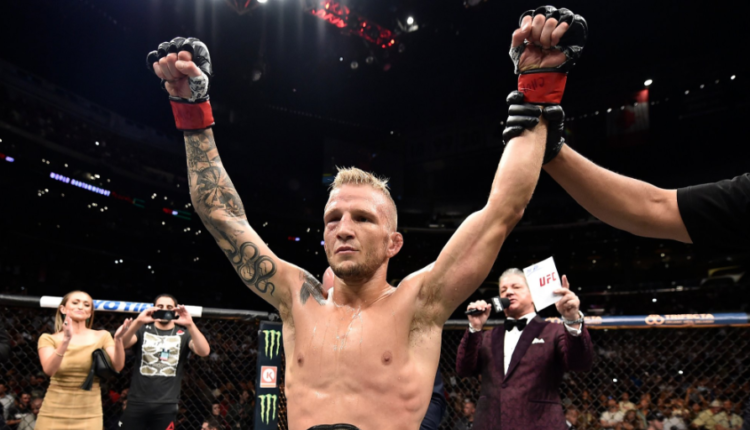 Dillashaw: “Bantamweight Division Needs Me Back”

Even in a stacked bantamweight division that houses a number of contenders, T.J. Dillashaw still believes the division is all about him.

In a recent interview with Helen Yee, Dillashaw (16-4) stated that the division is waiting for him to come back and dominate.

“That bantamweight division needs me back,” Dillashaw stated. “They need the entertainment back, and they need me to come back and throw some wrinkles in the weight class and create some tension.”

Dillashaw was last seen losing to Henry Cejudo back in January for Cejudo’s Flyweight Championship. He later relinquished his Bantamweight Title and was suspended by USADA for using an EPO. Cejudo ended up beating Marlon Moraes for the vacant title back in June. The earliest Dillashaw can come back inside the octagon is January 2021.

While there are contenders like Aljamain Sterling and Petr Yan, Dillashaw believes he should get a title shot when he comes back.

“Me. When I come back,” Dillashaw stated when asked who the next contender should be. “That’s why they need me back, they need someone to cause some fire, cause some rift. That is my weight class, I had to give that belt up and fair enough, I understand. I f*cked up, and I had to relunqiush it. But, I didn’t lose. That’s my belt, I’m still calling it my belt. I’m still the champion of the world. When I come back I will reclaim it.”

Holyfield To Fight In Japan