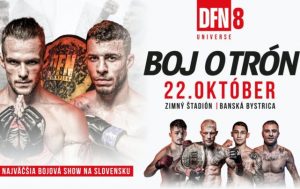 It’s a bit of history in the making, as DFN 8 in Banská Bystrica will be hosted at the newly renovated hockey stadium! It will definitely make for an unforgettable night full of atmosphere, emotions, world class fights and a crowd of thousands of fans.

The main event is a title clash between Tutura vs. Fernández. Tutura is undefeated at DFN, and is by many experts considered to be the successor of Vladimír Moravčík.

In his first fight at DFN he defeated Kňažek. Then in an epic fight, considered by many fans to be the toughest domestic match-up for several years, he defeated the European WMC champion Josef Talafous.

At DFN 7 he finished off Vokoun with a textbook High-kick, which secured him the status of title contender.

The bullfighter of Barcelona, Alex Fernández has also defeated Talafous, and in his last fight in Newcastle, England he beat the British champion in the main event of the evening. Fernández  is standing in the way of Tutura for the coveted title.

Both guys are world class Muay Thai fighters, and both guys deserve the title, but only one can win: will it be he successor of Moravčík, Tutura or the temperamental toreador Fernández? 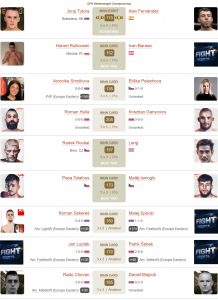 The entire show can be watched live on Oktagon.tv.