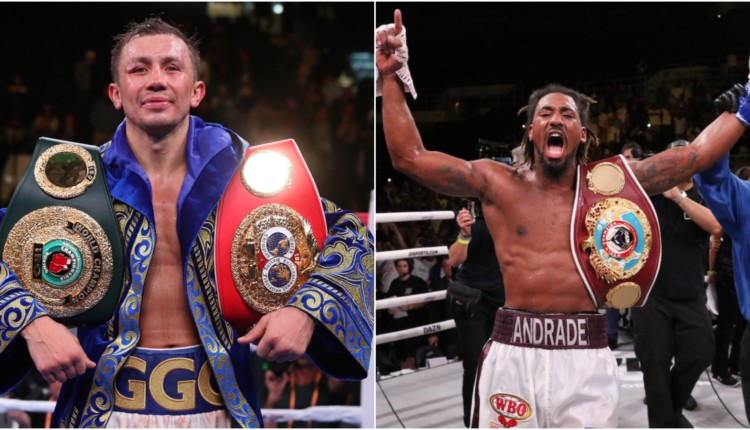 Golovkin is the IBF and IBO Middleweight Champion. Andrade holds the WBO gold. Andrade is fresh off a successful title defense against Liam Williams this past Saturday.

With Golovkin and Andrade both fighting under the Matchroom banner, one would think making a fight between the two is a no-brainer. Speaking to reporters, Hearn said Golovkin vs. Andrade in the summer makes sense (via BoxingScene.com).

“If I’m Gennady Golovkin or I’m Jermall Charlo. I’m looking at [Andrade] and going, ‘I can beat him.’ So, why not step up? Gennadiy Golovkin, a great champion, you know, he’s planning a fight with Murata on December the 31st. We’re in April. Gennadiy Golovkin should be looking and speaking to DAZN and us and saying, ‘I’ll fight Demetrius Andrade in the summer and then I’ll fight Murata in Japan.’ Two massive unification fights.

“Champions have to fight champions. And Demetrius can’t just keep defending his belt. He was great tonight. Liam Williams was great tonight. And again, like you said, [Andrade] was hurt, he was tired. He can’t make 160 forever. So, if you’re Charlo, if you’re Golovkin, let’s do it. Let’s make the unification fights. Champions v. champions. That’s what boxing’s about.”

Andrade has expressed his belief that in order for the likes of Golovkin to fight him, they’ll need to be given huge paydays. Andrade feels he’s viewed as a high-risk threat to the major stars of his weight class.