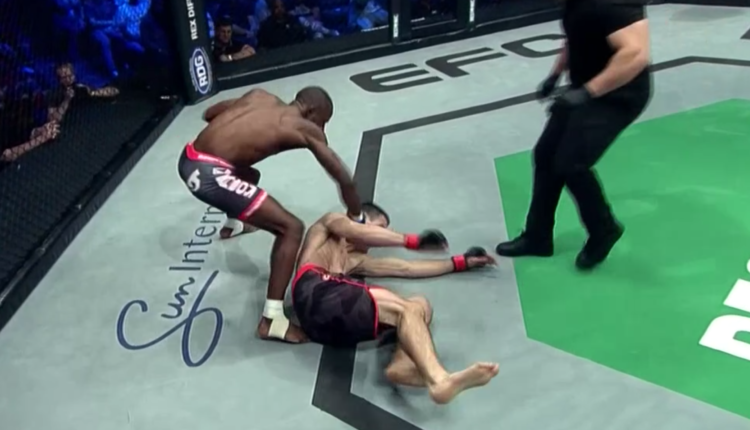 Message to the UFC sent by Igeu Kabesa, who needed just a little over a minute to pull off a big win, as he quickly knocked out his 8-0 challenger, Karlo Caput, to retain the EFC Featherweight Championship.

Caput came out firing right away with an overhand to start off the fight as the two began to feel each other out. Kabesa threw a couple of leg kicks, and the thought was the fight’s momentum could tip depending on how Caput reacted to the first Kabesa takedown attempt.

A takedown attempt wasn’t needed, however, as Kabesa countered another missed overhand from the Croatian challenger with a left hand of his own that landed on the button. Kabesa then landed a couple of more punches before the referee called the knockout.

Following his win, Kabesa made a case to get signed by the UFC, but expressed gratitude towards his run in the EFC, where he has been one of the organization’s most successful champions. In fact, Kabesa’s only loss in his career is to Danny Henry, who made it to the UFC.

“Dana White, say something, man. I’m coming for your belt. UFC very soon,” Kabesa said. “I have to be thankful to EFC all the time. If it wasn’t for them, I wouldn’t be where I am in my career right now.”

Whyte: The WBC is protecting Wilder

De La Hoya Wants To Move On From Feud with White