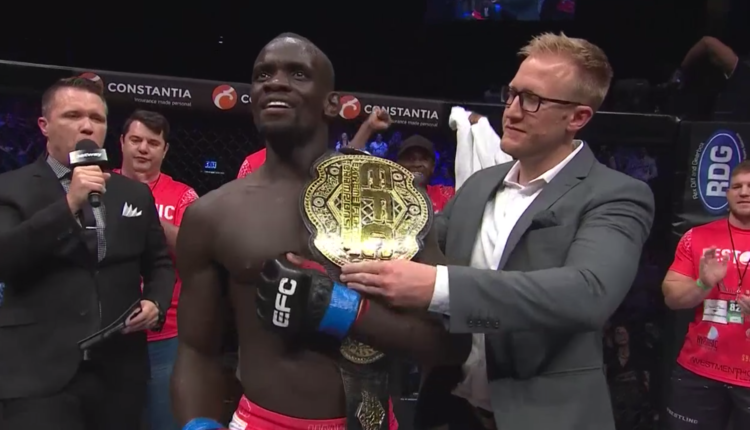 With his win, Gorimbo became the first Zimbabwean champion in EFC history. He was the only one of the main event competitors who could win the EFC title, as Michael missed weight.

The exchanges came out right away as the fight got underway, but Gorimbo got control attempted a guillotine as the fight was brought to the ground. Michael managed to escape and got in some offense, but he was cut open badly from a flurry of punches while on the ground, and the referee called in the doctor to inspect the cut.

The fight was ultimately resumed back on the ground, but it didn’t last much longer. Gorimbo targeted the cut, and after another failed choke attempted, delivered vicious ground-and-pound until the referee waved the bout off, awarding the tournament title and welterweight title to Gorimbo.

In the co-main event, Simon Biyong put on a big performance for a spectacular EFC debut, as he stopped Quinton Rossouw to win the vacant EFC light heavyweight championship in his first fight in the organization.

Rossouw started off the fight as the more aggressive fighter as the two exchanged, but Biyong managed to catch him with an uppercut, briefly rocking Rossouw. Rossouw reversed, however, and secured Biyong’s back, nearly securing a takedown before a reversal from Biyong. The rest of the round saw tons of exchanging on the ground, with Biyong getting the better of it, even getting full mount at one point.

The fight returned to the ground in the second round, where Biyong resumed his control of the fight in tp game. Biyong delivered a couple of elbows, and Rossoouw’s eyes rolled into the back of his head, giving Biyong the win and championship with a knockout.