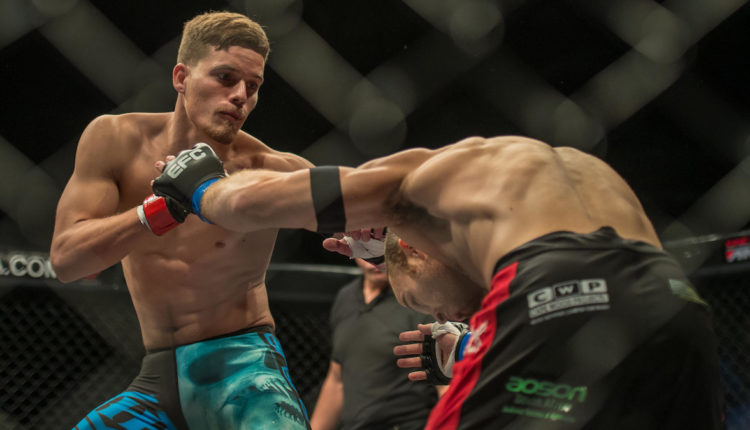 On Friday, the EFC held their weigh-in’s for this Saturday’s event in Cape Town. EFC athlete Wayde Sage, who was at weigh-in supporting his his PFA teammate Shane Meier, suddenly found himself signing for a main card fight.

This comes after it was announced that Shaun De Lange would be unable to compete due to illness, and EFC match-maker Graeme Cartmell extended Sage the offer after learning he was in the crowd.

“I knew Wayde was in training, I know the type of athlete he is, and the last thing we want to do is cancel a fight… Conrad (Seabi) said he’d be happy to take a late opponent change, and Wayde took the chance.”

Conrad Seabi became a proud father on Tuesday night, just hours before appearing at the EFC 63 media event. To him competing is crucial, and he gave his nod of respect to Sage for stepping in.

“What an absolutely crazy day!” said Sage. “This morning I was just attending EFC as a fan, and now I’ve stepped onto the main card! I’m confident for the fight, and enjoying the lack of pressure. This kind of thing doesn’t happen everyday, and I plan to give it everything.”

“Wayde is an absolute beast for stepping up on short notice,” said EFC president Cairo Howarth. “It’s athletes like him that make our sport so dynamic, and EFC itself such a highlight with fans. Thanks Wayde!”

“We’re sorry that Shaun (De Lange) couldn’t compete,” Howarth continued. “He trained hard and was fully prepared. It’s a tough turn of events for him. We wish him a speedy recovery.”

Sage was given a full medical check by event doctors, and cleared to compete.

His bout takes place at a catchweight of 85kg.

Borg Claims Healthy, But Still Pulls Out Of UFC 215