The Fighters Must Pass The Test And Weigh-In To Fight!

Ever since  ONE Championship was founded on July 14th 2011, it has given the fans exciting shows with some of the best fighters in the world showcasing multiple combat sports disciplines including MMA, Muay Thai, Kickboxing, boxing, submission wrestling and Lethwei.

From day one the promotion sat itself apart from every other major martial arts organization in the world with its policies in place to protect fighters from extreme weight-cutting tactics. While it seems like fighters in certain organizations are depleting their bodies, even fainting at times during the weigh-in process, ONE Championship’s focus on fighter safety is what combat sports need!

ONE Championship’s weight classes are unlike any other organization in the world. ONE Championship has been an industry leader by banning weight-cutting via dehydration. Instead, the promotion has implemented a revolutionary system that ensures athletes are hydrated, fit, and healthy ahead of their bouts.

The new program, which is the first of its kind for combat sports, is focused on athlete safety by introducing “walking weight” competition via multiple weigh-ins and hydration tests before and during event week. An athlete’s “walking weight” will be tracked on a regular basis throughout the period that the athlete is contracted to ONE Championship. 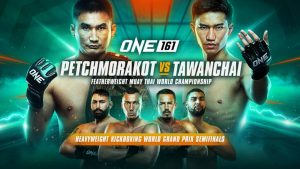 Earlier today eight fighters failed the hydration test leading up to ONE 161: Petchmorakot vs. Tawanchai. What does this actually mean, and how does ONE Championship’s Hydration & Weigh-In System actually work?

Here’s another snippet from onefc.com:

When athletes arrive at ONE Championship’s athlete hotel at the start of event week, their weights will be checked. Every athlete must be within the restrictions of the contracted weight class or catchweight limit.

During event week, all athletes will participate in a combined weigh-in and hydration test. Hydration will be checked through a urine specific gravity test in which every athlete will submit a urine sample to a medical technician. Under the guidance of ONE Championship’s doctor, the technician and doctor will test the sample to ensure the athlete is hydrated with a urine specific gravity value of 1.025 or below. If the athlete passes this test, he or she can weigh-in. The athlete’s weight must be within the restrictions of the contracted weight class or catchweight limit.

If an athlete fails the hydration test on event day, he or she is not permitted to compete. Should an athlete pass the hydration test but weigh-in above the restrictions of the contracted weight class, then the bout may take place at a catchweight if the athlete is within 5 percent of his or her opponent’s official weight, and if the opponent agrees to competing at this catchweight. Additionally, a percentage of the athlete’s purse will be given to the opponent due to failure to make the contracted weight.

Post-bout weight may not exceed 5 percent over the weight class or catchweight limit. If an athlete were to commit this offense, he or she will be held to the rules below:

Second offense: the athlete will be penalized 25 percent of his or her total fight purse.

It is great to see a promotion actually putting safety first – not just stating that safety comes first. Here’s to hoping that all fighters make the hydration test and the weigh-ins.