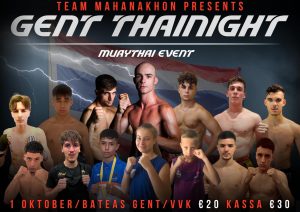 The main event of the evening is Belgian Gianny De Leu vs. the Italian Giuseppe Gesuito. De Leu is 20 years old, and is one of the best Muay Thai fighters in his division in Europe. He has won several titles as a youth amateur and recently as a professional. Now he is gunning for the European WMC title.

Earlier this year De Leu became world champion, under another sanctioning body by beating Kazakh Shamil Yermagambetov, which earned him the number 1 spot on the WMC European ranking. To get the WMC title and belt he now has to face the number 3 ranked (with the WMC)  Giuseppe Gesuito.

The Chairman of the Federation of Belgian Muay Thai explains how the Italian opponent was chosen:

We do not choose these fights ourselves. The choice is made by the World Muaythai Council. They do that depending on the level of the fighters and see what is possible.

Van Acker says that having a Belgian winning the title would be nice, but most importantly it provides motivation for other Belgian Muay Thai fighters – something to dream and train hard for.

It’s interesting to see an actual Muay Thai title fight from the respected WMC taking place in Belgium. The country has been known for hosting events under the same associations as their Dutch neighbors. Could this be a sign of a competition of who’s the biggest between the WBC and WMC, since both sanctioning bodies are aggressively growing their promotions globally these days? Who knows.

Albeit this is a good development for the sport of Muay Thai and everybody involved with the sport. 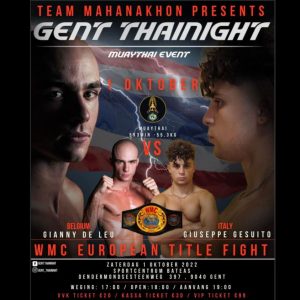