Roman Kryklia Talks About His Career, The Ongoing War And His Next Fight. 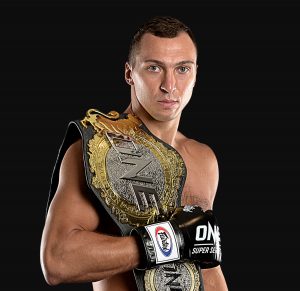 Roman Kryklia is a Ukrainian Light Heavyweight Kickboxer, who is currently signed to ONE Championship, where he is the inaugural and current ONE Championship Light Heavyweight Kickboxing world champion.
He is the 2015 Superkombat World Grand Prix runner-up, and won the Kunlun Fight 80 event in China, and the K-1 World Grand Prix 2016 Belgrade tournament champion.

All pictures are courtesy of ONE Championship unless otherwise stated.

Roman Kryklia COLLIDES with Guto Inocente in the ONE Heavyweight Kickboxing World Grand Prix semifinals at ONE 161 on September 29!#ONE161 | Sep 29 | #ONEChampionship pic.twitter.com/R3NRvk7uy3

FIGHT SPORTS: Right Champ please tell our readers about your self?

Kryklia: Sure. I was born in a small town called Krasnograd, which is in the Kharkiv region in Ukraine. It was the ordinary family life. My father was a teacher, and my mother was a housewife. I also have an older brother.
Ever since I was 7-8 years old, I began to spend my spare time on the streets with my brother. Usually we gathered in big groups and played, fought, hooliganized. In short, I had an ordinary childhood.
During those days we had our own ranking: who is stronger of the same age in the class at school. And it was always very important for me to be number one in this ranking. Sometimes I had to fight, and sometimes even for no reason. Thus from an early age, it was important for me to be physically developed and able to fend for myself. I went to karate classes when I was 6, and since that time I’ve been involved in sports.
My first coach ever was Valentin Kozhushko, and I am very grateful for him – he put me on the right path. From the first day, I really liked it there (the karate classes).
Later I had some success in competitions, so it motivated me to get even more involved.
When i finished school i was 16, and I went to a boxing class. In Ukraine we have a strong boxing history, so I got a great coach. His name is Viktor Demchenko, and he is one of the best boxing coaches of Ukraine. He instilled in me a love for boxing. I trained, I liked it, I progressed. So much so that I even abandoned my studies at a prestigious university (later I finished my degree).
During this period I met and became friends with Maxim Kiiko. He was a Muay Thai coach. He suggested that I tried Muay Thai, and at first it was just for fun, but later, of course, I really fell in love with this form of fighting. Because of this I completely switched to Muay Thai, and later to Kickboxing.
My first professional fight was in 2011. It was at that moment that I realized that Kickboxing is my dream occupation, and I decided to follow this path to the very top.

FIGHT SPORTS: That is so cool.
I seem to remember you fought for Superkombat, K-1 and also Kunlun, so you have a lot of experience. How are these promotions different from each other in regards to planning, logistics and the way you are treated as a fighter?

Kryklia: The higher your level as a fighter is, the better you will be treated and accepted everywhere. In general, all top promotions provide good conditions for fighters. When I remember some of my trips to fights, the most important thing is still how I the fight went: if I had a good fight, I might not remember if the bed in the hotel was a bit short or that the breakfast was not to my taste. So it was never a matter of principle for me.
Now I’m in ONE Championship and they are objectively many times better than all the others promotions I fought for. And I have been to almost all the best tournaments in the world. Now, after the pandemic, there are certain restrictions on the movement and location of athletes, but this is understandable, given that the organization is afraid of putting athletes at risk of getting sick.

FIGHT SPORTS: Right.
Did you always want to be a world champion, or did you just start out training for fun, or maybe for self defense?

Kryklia: As I said earlier, my view of professional Kickboxing changed drastically on the day of my professional debut. I got a lot of adrenaline; I was in the center of everyone’s attention; I showed my best side and on top of all this I got money for fighting. It was love at first sight and for the rest of my life.
And the better you get, the bigger goals you pursue. And sooner or later you come to the fact that you want to be the best in the world in your sport.

FIGHT SPORTS: You’re very competitive – a real warrior.
Were you successful from day one, or have you experienced periods with losses where you thought about quitting?

Kryklia: Over the years you become more confident, stronger inside, and thus it becomes more and more difficult to lead you astray. But there are psychologically difficult periods of training. This is often associated with injuries or when something just doesn’t work out in training.
With age, I now understand that this is just that: a period which will pass, so I try not to get excited about it, and just wait it out and go back and follow the plan.

FIGHT SPORTS: That’s a very positive way of dealing with the ups and downs of life in general.
So right now, do you have any goals or plans fighting wise?

Kryklia: At the moment I’m mostly focused on Kickboxing. I want to win the ONE Championship Heavyweight title and defend it too.
I don’t have exact plans for the near future, but I’m ready for different twists and turns. I’m 30 and I still have some years in me.
If I decided to change discipline, I think it would be boxing, since I love it – much more than MMA. But who knows – maybe I’ll have a go at MMA too.

FIGHT SPORTS: Cool.
Let’s get into the bread and butter of a fighter’s life: the training. What does a normal training schedule look like for a big guy like you?

Kryklia: When I have no fight booked, I train once a day six times a week.
But when I’m preparing for a fight or in a training camp, I train two to three times during the day. I usually work in pairs on Monday, Wednesday and Friday. Do a lot of special drills on defense, timing, movement, make up my own combinations and so on. All this is always under the supervision of my coach Andrey Grydin.
On Tuesday, Thursday and Saturday I do strength training. It can be work with simulators, barbells, body weight, bands, etc. I work with my physical training coach Alexei Dashkevich.
On top of that I run about two times per week to develop aerobic capacity. I also feel my feet are more springy and mobile after running, making my footwork better.
I have separate training sessions on the pads with my coach too. During those session we analyse tactical moments and improve the fighting techniques.
I also like to go swimming two to three times a week during some periods, but this is not a constant thing.
I’m also a true believer in discipline when doing sports at a high level – they co-exist. Without discipline you cannot reach the highest level.
I go to bed early and get out of bed early too. Eat at about the same time every day. These things seem to be simple things, but they mean a lot to me.

FIGHT SPORTS: I like that. Loads of discipline.
I have to ask you Kryklia: do you currently reside in Ukraine? I mean it must be really difficult keeping focused on staying sharp for your fights for ONE Championship, when your country is at war.

Kryklia: For the last nine years I have been training and living in Belarus. I came there specifically because of my coach. My wife is Belarusian too.
All my relatives are still in Ukraine though. After the start of the war, many people left the country, but my family remained. Fortunately, everyone is alive and well.
I am from the eastern part of Ukraine, which borders on Russia. So I always had friends from Russia, and I often went there to see them. But now for me it is an enemy country. Of course, I communicate and train with many guys from Russia, but we don’t discuss politics during training. But I’m quite sure that their opinion about the war is the same as mine!
The war is constantly distracting me, and removing my focus. Sometimes it’s driving me crazy! But I know that with my victories in the ring, I will help Ukraine at least a little bit, and therefore I try to abstract as much as possible in training and think only about the task at hand.

FIGHT SPORTS: Yeah it’s crazy. Let’s hope it is all over really, really soon.
When is your next appearance for ONE Championship?

Kryklia: Right now I am in training camp in Thailand to prepare for my upcoming fight on September 29th at ONE Championship in Singapore. It is a four man tournament, Grand Prix style in the Heavyweight division. I’m facing Guto Inocente from Brazil.

FIGHT SPORTS: Wow: moving up a weight division!
I think I speak for millions of people when I say that we hope for the best for you and your country, and we are all excited and really looking forward to seeing you fight again.
From all of us at FIGHT SPORTS: thank you very much for your time Champ.

Thank you Thomas and FIGHT SPORTS for your interest in me and the promotion of our sport. Please continue to please the fans with interesting articles.