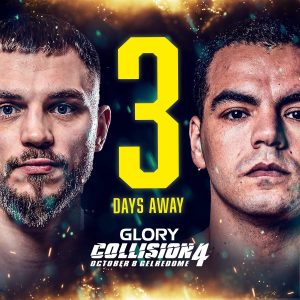 Tarik Khbabez is a 30-year-old Moroccan-Dutch Kickboxer currently signed to Glory Kickboxing, where he used to compete in the Heavyweight division, but has recently moved down to Light Heavyweight.

In 2021, he was the runner up for the Glory 77: Rotterdam Heavyweight Tournament, and this Saturday he fights on Glory Collision 4 in a Light Heavyweight Kickboxing world championship title fight against the Lithuanian fighter Sergej Maslobojev.

Khbabez sat down with FIGHT SPORTS yesterday and openly talked about his life and career.

FIGHT SPORTS: Right Tarik, let’s get it on. Would you please introduce yourself to our readers?

Khbabez: Hi everybody. I’m Tarik Khbabez. I’m a father of two beautiful boys aged four and three – I live with my partner in the Hague, Holland.

I’m a professional athlete and train full time at the ARJ Trainingen camp in Hague. I do not work outside of my fighting career, since it’s impossible to combine world class level fighting with having a job on the side.

I did study at school in the past year to obtain a diploma though, and I finally achieved that in July this year. I am really happy about having the diploma, since there’s no guarantee in life, so you should always have a backup plan. And it’s also very important for me to be a role model for my children.

Now Khbabez I know you’ve fought for some of the biggest organizations in the world – like ONE Championship, Superkombat and Glory Kickboxing. What are the differences in the various countries when you fight at these event?

Khbabez: All the promotions were great and was a great property or brand locally. But with ONE Championship it was an entirely different world: the combat sports are really, hmmm, alive in Asia – we couldn’t walk down the streets there without being recognized by fans. People really appreciate the sport and the athletes, and the events were really well organized. It was a great experience for me to have experienced being part of ONE Championship personally but definitely also as a fighter with more fights being added to my record.

When I was fighting for Superkombat, the shows were broadcast on Eurosport, which was a first for me. Fighting on live TV was a dream come true for me. You know being watched by thousands of people – especially in Romania where where Superkombat is based. The events were very well organized.

FIGHT SPORTS: Fantastic. So you have a fight coming up at Glory Collision 4 in three days. How are the preparations going, and are they different for this fight?

Khbabez: my sparring partners have helped me stay sharp, but it is not only the sparring partners but everybody who’s in the gym. They sympathize and help with the preparations. We have trained really hard for this fight, and since this is five rounds fight, we have specifically worked on my cardio and a specific game plan for my opponent – we are ready and will return home with the win.

FIGHT SPORTS: Cool. What kind of fight can we expect this Saturday then?

Khbabez: I expect the fight to be extremely tough. My opponent is very technical, but I am the better fighter, so it will be a battle where the audience and the fans are the real winners.

We are very confident that we will get the win, since we’ve prepared well and trained hard. I’ve fought the fight in my head over and over again, and it can’t go wrong. The entire team is looking forward to it – I cannot wait, it’s going to be war.

What does your friends and family think about your chosen career?

Khbabez: My friends all like it and support me everywhere. My family, yes they also think it’s super fun and is happy that I do what I love. My mother is too afraid to watch my fights, so she hasn’t seen me fight, and my partner also watches my fight with one eye closed, ha ha. It’s a tough sport, and one mistake can be fatal, so I understand them. I think it would be the same if one of my sons were fighting at this level – it would be very difficult to watch.

But my family and friends definitely support me and are always behind my choices. They know this is what I love, and they wouldn’t want it any other way.

FIGHT SPORTS: Ha ha, okay.
What does a regular week for you look like? Training wise.

Usually I do strength and conditioning training on Monday mornings at 11 at Immersive Studios in Rijswijk with Dennis. Then I do foot work and conditioning focused on my fighting – very taxing training. Then around 18:30, I go to the Kickboxing gym, ARJ Trainingen to do specific Kickbox training.

On Tuesday mornings at 07:40, I take the youngest child to school, and then I do interval running until 9 O’clock. Then I go sparring at the gym.

On Wednesdays, I bring my youngest son to school again and then go to the physiotherapist at nine.
Then at ten I am at ARJ Trainingen where we do strength and heavy fitness training.

Then at 18:30 I do Kickbox training at ARJ Trainingen.

On Thursdays, I take the kid to school, and do the interval running again. On Thursdays, I run with a team called Romano. For the rest of the day I relax and recover. The recovery periods are very important, and are a key part of the entire plan.

On Fridays, at 10 I’m at ARJ Trainingen, where I do bag training, and in the afternoon I go and pray at the mosque, and then it’s back to the gym at 18:30 to do more Kickbox training.

On Saturdays ,I do sparring, and on Sundays, I recover and rest.

FIGHT SPORTS: Wow, that is some schedule, ha ha. Fantastic.

Do you have certain ambitions and goals you’d like to achieve in Kickboxing?

Khbabez: My hope is that later in life I will be remembered as “The Tank“ – an unstoppable fighter. Basically my goal is to become a legend, and to be compared to all the greatest fighters who have brought this martial art to a high level.

I want to dominate and win all the titles, and be the best, but also to stay on top as one of the best.

FIGHT SPORTS: Amazing – that’s some big ambitions.
So what are the biggest achievements in Kickboxing you’ve experienced so far?

Khbabez: my biggest achievement really, is that I’m fighting all over the world. You know getting to know a lot of different cultures.

When I turned to professional fighting, I had the opportunity to train and spar with Remy Bonjasky, and later I also started sparring with Badr Hari. These guys were the greatest fighters at the time together with Peter Aerts, whom I also got to train with. It was a huge honor for me to be able to train with Peter Aerts and spar with these big names, and especially that I could experience so many parts of the world through Kickboxing.

Let’s talk a bit about the mental part of the fighting game: how do you actually feel, when you win a fight, and what goes through your mind, when you lose?

Khbabez: When I win a fight it’s overwhelming: you’re beat up from all the hard work, but then it finally paid off and all the training was worth your time.

But when I lose a fight, it can be really destructive mentally. It’s almost depressing and it’s like falling into a deep hole, where you don’t want to talk to anybody. I’m really sad, and keep thinking “where did it go wrong“ all the time, and sometimes you think about quitting. I often said to my trainer Maikel Polanen after a loss, that I wanted to be done with it all, and these thoughts really destroys you.

But then you go to sleep at home and rest for a few days, and the champion mentality creeps back into your head, and you think “there’s no way I’m quitting – the champions are the ones who keep going, so I will keep going too!“

FIGHT SPORTS: Yeah fighting definitely is a tough game with it’s ups and downs. That’s for sure.
Have you thought about what you want to do when you retire from fighting?

Khbabez: When I’m done with fighting, I hope that I can do something for society and that I can help the young people. You know so they get a purpose with their lives. Guide them towards a better future and bring down the crime rate through my work. This is where my passion is – I like to help others.

Right I think we’ve been through all of my questions.

Champ: it has been an honor. Is there anything you’d like to say to the readers of FIGHT SPORTS, the fans around the world and maybe to your future opponents?

Khbabez: I would like to thank my trainer Maikel Polanen, who has been working with me for seven years, and who always believed in me. I want to thank my partner and my mother and sister, and also my entire family who supports me, and live with me through the ups and downs. My partner always makes sure I don’t forget anything every single day – prepares my food, packs my supplements and so on. She makes sure I don’t forget anything.

And Ric my physiotherapist: if he hadn’t come into my life three years ago, I would have stopped due to my injury. He’s the number one doctor: nobody could help me except for him, and because of that I can fight and stay healthy at the same time.
And lastly I want to thank my main sponsor, since they support me and believe in me. They basically support me in anyway they can – not only financially. Thank you.

FIGHT SPORTS: Awesome. Mr. Khbabez it’s been a pleasure: good luck in your title quest on Saturday and thank you for taking time out of your busy schedule to speak to us.

Wanderlei Silva Unsuccessful In Securing A Seat In Brazil’s Congress