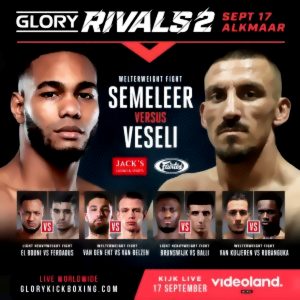 The Glory Rivals 2 late replacement for the headliner, Shkodran Veseli was born on December 9th 1990 in Gjakova, Kosovo. When he was 22, he moved to Zurich, Switzerland to pursue his professional Kickboxing career.
“The Albanian Warrior” fights in the Welterweight division, where he has amassed and incredible 84-20-1, 47 coming by way of knockout!

Last week Veseli sat down and talked to FIGHT SPORTS, and here’s what he had so say.

FIGHT SPORTS: Right Shkodran: could you please tell our readers a bit about yourself?

Veseli: Sure, hmm where do I begin.
Right: I traveled to Switzerland in 2013, as I was very excited about the entire combat sports scene, and because there weren’t many fight opportunities in Austria, where I lived at the time.

When I was there, suddenly there were also many opportunities to fight, and so I was undefeated for a while, and my motivation grew even bigger.
I started working as a technician, repairing household appliances in Zurich, as I wasn’t able to get by as an athlete only yet. I love the job but that has never stopped me from living my dream in martial arts. Kickboxing and Muay Thai have given me everything. I was taught the discipline of respect and perseverance in life . Today I live with my fiance, and she helps me a lot in realizing my dreams. Of course I am proud of her, because it is not so easy for her to live with a fighter.

FIGHT SPORTS: That is so cool. Support is extremely important.
So now you are officially a Glory Kickboxing fighter. How did it all start for you?

Veseli: In this sport it is difficult to be the best, but now I have the opportunity to face one of the best fighters: Endy Semeleer.

I train for up to 5 hours, 5-6 times a week. As I work so hard, obviously I want to compete against the best.
When I started fighting, I was already watching fighters like Nieky Holzken, Marco Piqué, Peter Arts, Badr Hari and many other Dutch fighters on TV. They motivated me a great deal. I always wanted to be a part of that.

Then Glory Kickboxing started, and I never had any support (manager) or anyone to take me there. At one point I thought that time was running out. I mean I fought all over the world (Europe, Russia and America), but never at Glory Kickboxing event.
But I never gave up on believing that I could fight the best, and these days I have a manager, Frank Mach, and he got me into Glory Kickboxing. So here I am: a Glory Kickboxing fighter.

FIGHT SPORTS: That is so cool. Perseverance pays off!
What kind of disciplines do you practice these days?

Veseli: I train boxing, Kickboxing (Dutch style) every day. Of course, martial arts also includes strength and endurance training.
I started Muay Thai 16 years ago just as a hobby, and really wanted to know what it felt like to be in the ring – to fight for real.
Because of that I gave up a lot of things: education, friends, spare time etc. But through the sport I also got away from bad ideas and bad thoughts in my head (crime). Muay Thai became part of my life and changed everything for the better. Being a fighter has a great meaning to me.

FIGHT SPORTS: Yeah combat sports have removed a lot of people from criminal activities and saved a lot of lives that’s for sure.
What do your friends and family think about your chosen career?

Veseli: I started my career in Vienna. Of course, I also had my first professional fights there. When it got to the point that my face was on the posters, there was a lot of great recognition among my old circle of friends, schoolmates and at work. My friends backed me at every fight and always motivated me. I am very grateful for that.
My older brother motivates me a great deal, but my parents never took much pleasure in my fighting. No matter how the fight went, win or lose, if there were injuries, it hurt them more than it hurt me. My mother would actually have to suffer more than me. She was the one who had washed and ironed thousands of sweaty, bloody clothes for years. She waited until late in the evening every day for me to come back from training, and served me hot food. Of course, the gym membership and training equipment also had to be paid for. She took over these costs until I started working.
So I am extremely grateful for her and for everything she did – she made a warrior out of me, and I will give everything back to her one day.

FIGHT SPORTS: You have a big heart. I like that. I’m sure your mother is very proud of the man you turned in to.

Lets talk a little bit more about training: What does a regular week for you look like?

Veseli: I start training at six in the morning at the Klub der Sportfreunde in Zurich, where I do my strength and conditioning training under the supervision of Ilir Halili.
After that I work 9 hours as a service technician for household appliances, and then I go straight back to the gym. Three times a week I do Kickbox training at Fight Gym Aarau with my coach: Zyber Rudaj. Two to three times a week I train with one of the best MMA fighters in Switzerland: Yasubej Enomoto.
Once a week I do boxing sparring with fighters like Faton Vukshinaj, Ramadan Madan Hiseni and others.

FIGHT SPORTS: That’s a whole lot of training: do you have a specific goal?

Veseli: I love to train and keep fit. My goal is to stay at welterweight and fight with the best in the world. I work hard on myself. I almost had a contract with ONE Championship at one point, but unfortunately it wasn’t finalized.

FIGHT SPORTS: Yeah keeping fit is great – both for the body and also for the mind.

What are the biggest moments in Kickboxing you’ve experienced so far?

Veseli: For me every fight is one more experience in my Kickboxing career. In 2021 I won against the undefeated Giga Dzikadze in the 2nd round by heavy KO.
In 2022 I faced Emil Zoraj, and we fought a battle until the last second. I lost the fight, but it was a huge experience for me to fight against such an experienced and powerful fighter.

I won over Marco Pique, Daryl Sichtman and many more Dutch superstars.

My greatest experience so far was when I was crowned the world champion against a fighter from Glory Kickboxing in Las Vegas: I knocked him out in the 4th round.

FIGHT SPORTS: That is great. Kickboxing can be rewarding in so many ways.
How do you actually feel, when you win a fight, and what goes through your mind, when you lose?

Veseli: People who have never fought, have no idea how mentally hard it is to be a fighter and how defeat can drain you….

Mr. Veseli it has been an honor. Is there anything you’d like to say to the readers of FIGHT SPORTS, the fans around the world and maybe to your future opponents?

Veseli: I would like to thank God for keeping me injury free through 107 fights, and for giving me the strength to continue training and fighting at the highest level. I have never had any major injuries.
To all of my friends and family: I am very grateful for the fact, that you are always there for me – you guys motivate me. Without you all, the hard way would not be possible.

A big thank you goes out to my sponsors Ethemi GmbH, Berglöve, 4more SPORTS, Physio Sarmi and Robbie Timmers and also my Manager Frank Mach who made my way to Glory Kickboxing possible.

And ofcourse my my good sparring partners Achraf Ouchene and Marian Dzupka.

Thank you Thomas and everybody at FIGHT SPORTS for giving me the opportunity to tell my story – for the world to get to know “The Albanian Warrior”.

I hope that my opponent Endy Semeleer had a good preparation, because I’m not coming to Glory to make a show: I come with the attitude to go into battle!

I think I speak on behalf of the entire crew at FIGHT SPORTS when I say that it’s been most interesting listening to you – we all wish you success in your upcoming and future fights.

Deontay Wilder Hopes To Fight Anthony Joshua In The Future

Where To Watch: Corey Sandhagen Vs. Song Yadong Tonight