Eersel represents the Sityodtong Muay Thai & Kickboxing gym in Amsterdam, Holland. He is the ONE Championship Lightweight Kickboxing world champion. Nicknamed “The Immortal”.

Eersel first made a name for himself globally as the Lion Fight Super Middleweight world champion.

Eersel decided to turn to professional Kickboxing at an early age, and has since put together an incredible fight record beating some of the best in the world. Renowned for his kicks and flying knees, “The Immortal” has built a reputation as an incredibly exciting fighter to watch, and he now looks to begin a long reign as the ONE Lightweight Kickboxing world champion. 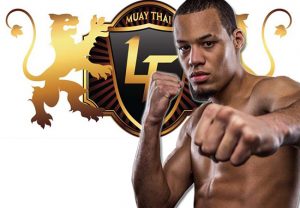 Eersel sat down with FIGHT SPORTS last week and told his personal adventure in Kickboxing, but also life in general and how it was to grow up in the Netherlands coming from a different country and culture.

FIGHT SPORTS: It’s an honor to get to interview you Champ: thank you.
Tell your fans about yourself please.

Eersel: my pleasure Thomas.
Right, my full name is Regian Eersel. I’m 29 years old, living in Amsterdam and I’m the current lightweight Kickboxing world champion of ONE Championship.
I was born in Paramaribo in Suriname, a small country in South America. When I was 4 years old I moved to Amsterdam, the Netherlands. Growing up in Amsterdam was difficult: it was a different environment, different people, different food, different weather – you could say that I had a culture shock as a child.

When I was a teenager I always watched K-1 on TV with my father. And back then I always wanted to try Kickboxing one day. The idea of travelling the world and fighting in front of so many people was a naive dream.
So when I was 15, I finally made the move to try out Kickboxing. I Googled the nearest gym in my neighborhood, and found out it was the Sityodtong Muay Thai & Kickboxing gym, so I went there and tried it out.
Seven months later, when I was 16 years old, I had my first fight and won on points. I fell in love with the sport. After my first fight I’ve almost fought every single month.
I turned pro when I was 18 years old. After a couple of pro fights in The Netherlands, I got the opportunity to fight in foreign countries. That went well and at the age of 24 I became the Muay Thai Middleweight world champion in Lion Fight Promotion in the USA.
My career was going real well, and I defended my Lion Fight title several times.

When I was 26 I became the Kickboxing Middleweight world champion at Mix Fight Championship in Germany.

FIGHT SPORTS: That is one HECK of a fast and great career.
As you mentioned you’ve fought for European, US-based and Asian promotions. What are the differences between these areas in the world promotional wise?

Eersel: Sure. Fighting in the US was a very good experience. The Americans do a lot to hype a fight. Personally I really love it. Although I’m a quite guy, and let my fighting speak for itself, I love the way the American promotions build up the fights to hype them. And the atmosphere is different in the US compared to that in Asia.
In ONE Championship it’s all about respect, which is good. But sometimes I miss fighting in the USA. If you compare ONE Championship with the other organisations, ONE is the biggest and most professional organisation I ever fought for in my career.
At my first fight for ONE Championship, there were more than 20,000 people in the stadium. The feeling when you step into the ring and 20,000 people are watching you is indescribable.

FIGHT SPORTS: Awesome. Yeah that must be a very special feeling.
You mentioned that you grew up watching K-1, and had a dream, albeit maybe a little naive dream, but was it always an ambition for you to become a world champion, after you actually started practicing Kickboxing?

Eersel: I never thought about being a world champion!
When I started my Kickboxing and Muay Thai journey, the goal was just to travel the world, making money, meet new people, learn from them and their culture. And the most important thing was and still is to enjoy the journey. I always had a job on the side and I still do.
I’ve made enough money to live off of my fighting career, but after my sport career I still need to be able to have a life. So the job on the side is my plan B.

FIGHT SPORTS: That is really interesting and admirable. You seem like a very intelligent and smart guy.
You’ve been massively successful almost from day one, but everybody experiences losses: what do you feel like when you go through the time after a loss?

Eersel: Hmmm, no not really: my career came with ups and downs. I had periods where I was thinking about quitting the sport and re-directing my focus on something else. And that wasn’t because I lost a fight.
I’ve had periods of times where I didn’t have any fights – no fights means no money. But my trainer always motivated me and kept saying that one day it will all pay off.

It´s more than six years now since my last loss, but I handle a loss well. A loss for me is three things:

Anyway a loss is a loss. The only thing I can hope for, is that I will get a rematch in the future.

FIGHT SPORTS: Yeah I get what you are saying, and think it’s a smart way of looking at and coping with losses.
Do you have any fights booked right now, and what are your current plans fighting career wise?

Eersel: My current fighting career plans are to defend my ONE Championship Kickboxing world title at least ten times. I want to write history as the first Surinamese to do that.
After that I will see what the future brings. Maybe I will transition to MMA. We will see.

FIGHT SPORTS: wow, that is a huge ambition. That should definitely put you up there with the greatest strikers from Suriname.
Let’s talk a bit about training, and what your regular training schedule looks like. Can you talk us through your training regimen please?

Eersel: yeah sure.
A normal training schedule for me is training twice a day on three days in a week. Most of the time it is cardio in the morning (running) and Kickboxing in the evening.
I do swimming with a swim instructor once a week too. I don´t lift weight, but when I do power training I work with my own body weight.
Besides my own training I also teach Kickboxing to adults: sharing my knowledge to the people. And most of the time if my teammates have a fight coming up I’m in their corner to coach them during the fight.

FIGHT SPORTS: that’s very interesting since it is less than most athletes at your level, but everyone can see that it’s working for you. Less is sometimes more!
Where do you currently reside, and how long before an event do you actually travel to Singapore?

Eersel: I currently live with my girlfriend and two daughters. My youngest daughter is seven months now, and my oldest is two years old.
I get all the support and love from them. And off course also from my parents who are now grandparents.

FIGHT SPORTS: Right. Singapore is a cool city!
Regian we have to talk about your nickname: how did you end up being called “The Immortal” – what’s the story behind that name?

Eersel: Yeah it sure is.
Well my nickname “The Immortal” was given to me by my teammates and friends, back in the day when I was fighting as an amateur: you see I never got tired during the fights and sometimes between the rounds I only took a sip of water and listened to my coach, and then after about 15 seconds I was standing in the middle of the ring looking at my opponent, ready to fight, while we still had 40 seconds left to rest, ha ha.

FIGHT SPORTS: Ha ha ha, awesome.
So you are scheduled to face the Thai Sinsamut Klinmee for the vacant ONE Championship Lightweight Muay Thai world title on October 21st 2022 in Kuala Lumpur, Malaysia. How are your preparations going?

We are obviously focusing on my elbows and my clinching game for this fight.
The team at the gym I train at, Sityodtong Amsterdam, helps me with my preparation for the fight. The preparations are going good. It´s intense, but it will be worth it in the end. You know, on fight night.

FIGHT SPORTS: Good stuff Champ.
What’s your take on Klinmee? How do you see the fight going?

Eersel: I think Klinmee is a very good opponent. He KO’ed his last two opponent, so he is dangerous and has power in his body. He likes to fight on the counter, and has more experience than me in Muay Thai.
I don’t think it will go to the fifth round: one of us is going down. And I’m training and preparing to make sure it’s not me.

FIGHT SPORTS: Interesting!
Eersel it’s been a pleasure talking to you. On behalf of everybody at FIGHT SPORTS I’d like to wish you the best of luck in your next fight and your future career.

Where To Watch: UFC 280: Charles Oliveira Vs. Islam Makhachev Tonight