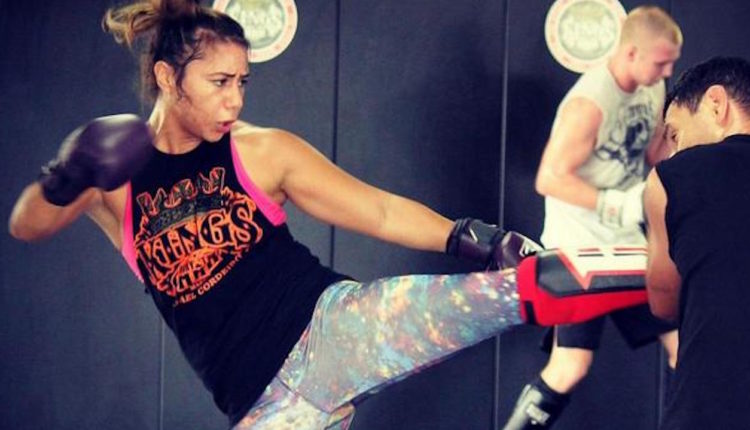 Growing up the daughter of a boxer and around three brothers and cousins, Kristi Lopez was always preparing for life as a fighter.

This Friday night at the Turning Stone Casino at Bellator 182, she returns to the cage after not having a pro fight in three years due to injury, and looks to make a statement. Lopez, who only has two pro fights under her belt, decided to walk away from nursing and focus on honing the warrior spirit that lives inside her whole family.

After making the change, Lopez sat under the learning tree at KINGS MMA to refine and shape who she is as a fighter. When we spoke with Kristi about the training camp for this fight, “we just back to square one and broke everything down.”

For a former nurse and artist patience is nothing new, but she looks towards eastern philosophy and the martial artist mindset into controlling your mind and creating a place where all you focus on is the task at hand. And her task this Saturday night is defeating Jessica Sotack. Sotack is coming off her first victory last month defeating Carmela James via TKO in the first round, so Lopez will need that warrior focus to avoid a similar fate.

Not only is this fight important for Lopez because it will be the first time she has fought since a loss to JJ Aldrich on the season premiere of The Ultimate Fighter Season 23, but because of her east coast roots. Her father trained and grew up in Brooklyn, and while Verona New York may be a few hours away, she is excited to fight on the east coast and bring that type of aggression to a live audience on SPIKE. The family connection is not only outside the cage, but Lopez has been cornered by her brother in previous fights and says she wouldn’t be where she is if her family didn’t have her back and support her decision to make MMA her career.

Kristi Lopez’s story is about chasing a dream, going after what you want most in life, and that’s what she wants to showcase this Friday night. Earlier this year, Lopez was featured Oxygen’s Living Different reality series, because of her MMA background. It wasn’t about the fame, or the money,

Lopez felt like she had an opportunity to “have a voice and help change someone’s life.”

When asked about the Oxygen special, Lopez was taken aback by the whole experience, especially even being picked for it. “It was totally weird, and I’m so grateful it happened.” She would go onto say she is grateful because it could potentially inspire other women coming out of hardship to “keep on fighting” outside the cage.