This Sunday is the finale of the Karate 1-Premier League, as Karatekas from across the world will converge upon Halle/Leipzig, Germany for their last chance for gold in 2017.

This season there have only been FIVE Karatekas who have reached the podium more than once, showcasing the depth of skill in high level Karate. These five look to make one more return to the podium as the quest for grand champion comes to a close this Sunday.

The big hero of the 2017 season after four events is Uzbekistan native SADRIDDIN SAYMATOV.  The 20 year old karateka has claimed a spot among the elite in Karate after winning three Karate 1-Premier League tournaments this year. The promising Uzbek champion surprised with a shocking 6-0 victory in the final earlier this year in Paris, and a major victory in Rotterdam with a 2-0 win over European champion Kalvis Kalnins of Latvia.

Barely one month later, Saymatov achieved an outstanding 8-5 victory over Aykut Kaya of Turkey in the final of Dubai. After his absence in Rabat, Saymatov returns to action in Halle/Leipzig so aim at wrapping up a historic participation in Karate 1-Premier League.

Japan’s RYUTARO ARAGA has also claimed the spotlight this season with two victories, in Paris and Rotterdam. The current World champion continued demonstrating his top form with a 4-1 triumph over Ilya Gravesov of Russia in the final in Paris. The 26-year-old karateka extended his domination of the Male Kumite -84kg category in Rotterdam, where the eight-time Karate 1-Premier League gold medallist claimed a tight victory over local star Rene Small. Araga could not achieve the triple crown in Dubai after finishing in seventh place. Absent in Rabat, the Japanese hero hopes to put a golden finishing touch to his quest towards the Grand Winner award with a triumph in Halle/Leipzig. 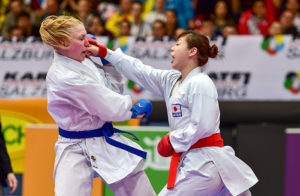 Fellow Japanese AYUMI UEKUSA is also one of the big names of the season after earning two golds this year. The current World champion has been one of the leading Japanese performers in the Karate 1-Premier League this year, with the nation claiming over 10 gold medals this year, two of which ending up in Uekusa’s hands.

The 25-year-old Japanese karateka prevailed in the events in Rotterdam and Dubai. In the Dutch city, the current Asian champion claimed a tight victory over Anastasiya Stepashko of Ukraine in the final. While in Dubai, Uekusa also finished with a disputed win over Aleksandra Stubleva of Bulgaria. Ayumi Uekusa has not lost a bout after her defeat in semifinals in Paris where she walked away with a Bronze, so the promising karateka aims at continue ruling the Female Kumite +68kg category.

Leading the rising Iranian representation at the event, SAJAD GANJZADEH has confirmed his status as one of the most powerful karatekas with two golds in the Male Kumite +84kg category. The current World champion clinched victories in Paris and Dubai to increase his standing as one of the most dominant karatekas of recent memory. The defending World champion got an impressive 7-1 triumph over Tyron-Darnell Lardy of The Netherlands. After claiming bronze in Rotterdam, the 25-year-old karateka reached the top of the podium in Dubai defeating 3-1 Georgia’s Gogita Arkania. Ganjzadeh will be one of the most notable absences in Halle/Leipzig.

Meanwhile, Azerbaijan’s IRINA ZARETSKA also caught the attention of fans with her two impressive victories this season. The 21-year-old karateka also represents the upcoming generation of young competitors who are taking the spotlight in international Karate. After being absent in Paris, the current European Junior, Cadet and U21 champion won gold in Rotterdam following a surprising 2-0 victory over World champion Alisa Buchinger of Austria in the final. Zarestka managed to continue shining in Dubai, as the Azeri heroine got a tight victory over Grand Winner Elena Quirici of Switzerland in the final. After finishing in fifth place in Rabat, Zaretska is not registered to participate in Halle/Leipzig.

Lethwei (Burmese Boxing) in ONE Championship?