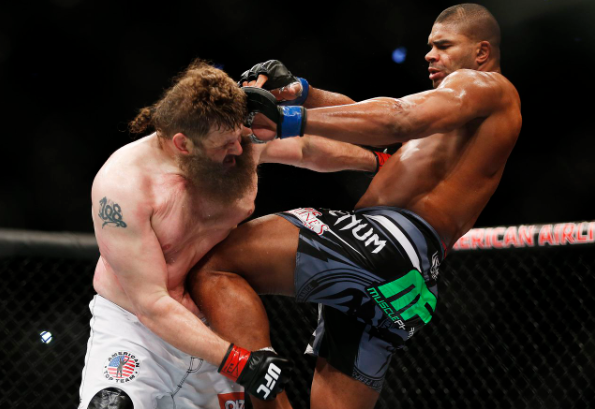 Former UFC heavyweight champion, Alistair Overeem, has scheduled both a wrestling match and a kickboxing fight for July and October respectively. However, that does not mean he is willing to retire from professional mixed martial arts, and he made it clear he would like to compete at least one last time.

“Absolutely not [done with MMA],” Overeem told The MMA Hour. “Might do one more [fight] or maybe two. Might be one.

“We’ll see what comes about but the calendar’s booked. We’ve got the Badr [Hari fight] and then we’ve got Rico [Verhoeven] after potentially so that will be next year and then we’ll see.”

Upon leaving the UFC, Overeem signed with Glory Kickboxing. He was meant to fight heavyweight champion Rico Verhoeven, although a back injury prevented this fight from occurring.

“It was kind of a severe one,” Overeem said about his injury. “I had it twice before. Every 10 years. I had it in 2001 and then I had it in 2012 or 2013 it was and then again now. It required a lot of care, a lot of stretching, a lot of treatments, that kind of stuff. Slowly, gradually it gets better.

“It gives me time to reflect on life and health and actually gives me time to upgrade. Upgrade in all the fields. So I’ve been doing just that. Now I’m ready to fight. The fight got announced in October. I’m enthusiastic about that. The rubber match, the trilogy fight with Badr. That is going to be a big fight for the world of Kickboxing. A big fight for the Netherlands.”

If all goes well, he would like to rebook the fight against Verhoeven for sometime in 2023.

When it comes to his options for potential final MMA opponents, a common suggestion is legendary Russian fighter Fedor Emelianenko. A fight between Overeem and Emelianenko might make sense since they have lots of history, however, he is not interested in fighting the Russian.

“Respect to Fedor,” Overeem said. “He hasn’t fought in a couple of years. I’ve been working on my compassion lately and I think challenging a man who has not fought for several years, I don’t really think that’s a good thing to do.”

“I’m actually getting really enthusiastic about it. It could actually also happen with the Fedor fight. Initially, not something I would really look for, but I don’t know. The hype kinds of speeds up, peopl

Dana White Explains How To Attract New Fans To UFC