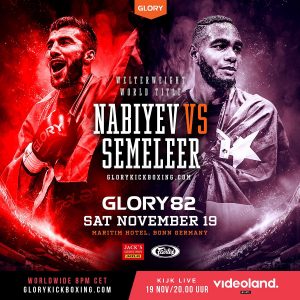 Looks like things are going in the right direction for the big Glory Kickboxing promotion: another event has just been announced.

🚨 #GLORY82 is taking place November 19 at the Maritim Hotel in Bonn, Germany and will feature the following bouts:

Originally it was announced on April 21st this year that Semeleer had signed with Glory – he was expected to make his debut against Harut Grigorian at Glory Rivals 1 on May 21st, but the event was later postponed, as The Lotto Arena announced that their cooperation with the Antwerp Fight Organisation had been terminated due to various administrative reasons.

Semeleer was then booked to face Robin Ciric in the main event of Glory Rivals 2 on July 25th, but Ciric withdrew from the fight on August 29th due to contracting COVID-19 – he was replaced by Shkodran Veseli.

Semeleer is now rewarded of his successful debut against Veseli, and he will face the second-ranked Glory Welterweight contender Alim Nabiev for the vacant Glory Kickboxing Welterweight championship title at Glory 82 on November 19th this year.

DFS 16: The Invasion Of The Heavyweights

Here’s Why Tyson Fury Vs. Anthony Joshua Is Off Once Again