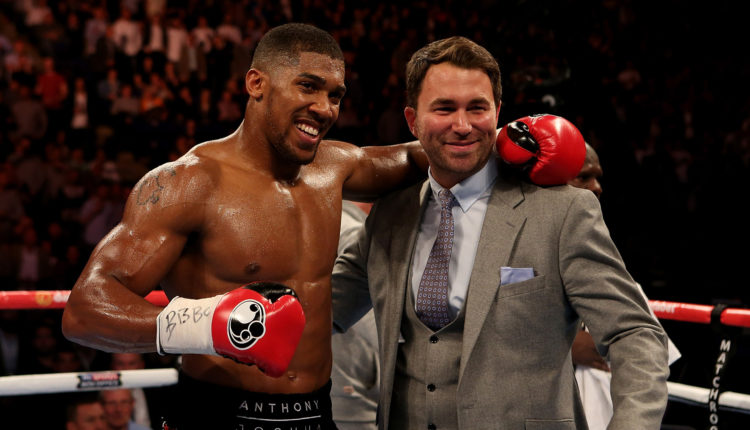 Eddie Hearn cannot deny there will be a lot of pressure on Anthony Joshua to regain the heavyweight championships he lost in upset fashion to Andy Ruiz Jr.

Joshua seemed to be off to a good start in their June 1 fight at New York’s Madison Square Garden, Joshua’s U.S. debut. Joshua knocked Ruiz down in the third round, but Ruiz came back to knock him down twice in the same round, then twice in the seventh en route to scoring a stoppage win. That ended Joshua’s unified title reign and ended his undefeated record in arguably one of boxing’s biggest upsets.

Joshua and team have exercised an immediate rematch clause, setting up a second showdown between the pair in either November or December. The bout is expected to take place in the U.K.

Hearn, Joshua’s promoter, believes the British fighter has all the tools to beat Ruiz and regain the titles. If he doesn’t, however, Hearn feels it puts Joshua’s career in a bad spot.

“There’s so much pressure on the rematch, as if he loses that second fight then his career is not in a great place,” Hearn said. “At the moment, he’s lost his world title belts and he’s got a chance to win them back. If he was to lose that second fight, it’s not career-ending but it starts to make you think about your career —and that’s long before we expect that moment to happen. The rematch is by no means a forgone conclusion.

“Ruiz’s confidence is going to go through the roof; AJ’s confidence probably isn’t going to be the same. I think he was probably too overconfident. What we saw was one of the biggest heavyweight shocks of all time. But we also saw an amazing fight, and now it’s down to Anthony.”