K-1 fighter Zanolini put's pressure on himself before the showdown in Yokohama.

K-1 was once THE biggest Kickboxing league in the world. A lot of things have happened since the heydays of K-1, but it is still a really popular promotion in Japan, with events taking place to capacity crowds at the big arenas. 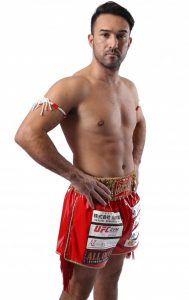 On Sunday September 11th 2022 the K-1 WORLD GP 2022 JAPAN “Yokoha Matsuri” event takes place, and several fighters did a open workout session. Amongst them was Danilo Zanolini who faces the Korean Park Yohan, who has a fight record of 15 fights with 8 wins (1 KO) and 5 losses.
Zanolini is half Brazilian, half Thai and currently resides in São Paulo, Brazil. The fighter has an incredible resume with several titles: 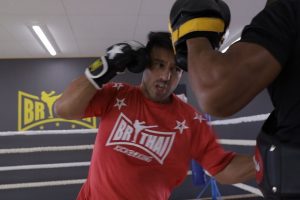 In the new K-1 system, Zanolini participated in the K-1 Tokyo Gymnasium tournament in February this year where he fought Katsuya Jinbo. Although he suffered a loss, Zanolini says: “I think I won that fight. I scored well in the 1st round, and I think I won the 2nd round – the ‘down’ in the 3rd round was not a ‘down’. I fell down – I wasn’t knocked down. Ah well….”

Despite being 42 years old, Zanolini showed that he can still hang with the top dogs at the elite level of the K-1 organization.

For Thai-Brazilian Zanolini, K-1 was his dream destination. He originally came to Japan for work, but when he saw K-1 in 1999 with Francisco Filho, Peter Arts, and Ernest Hoost, he wanted to be a K-1 fighter. 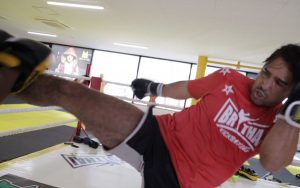 About his opponent, Korean Park he added: “His kicks are strong. His low kicks and left middle kicks are hard. He also has a solid straight right, so he’s a good fighter – he won twice at Krush, but I’ll face anybody in the K-1 ring. I’ve been working real hard, because this is my dream, so I have no choice but to win. And this time, it has to be via knockout. I’m training to beat him in the first round, but if it takes three rounds to get the KO, that’s fine – I WILL get that KO.”

Even though Zanolini is 42 years old, his fighting spirit is undiminished. His goal is to become the K-1 champion. He has won many world titles in the welterweight and middleweight divisions, but as he said, “I think I can still do it. I’m 42 years old, but I believe I can still become a champion. I’ll be in the K-1 ring, which is my dream. I started my career to become a K-1 World champion, so it would be cool to end my career with that title.”

All pictures courtesy of K-1 unless otherwise stated.