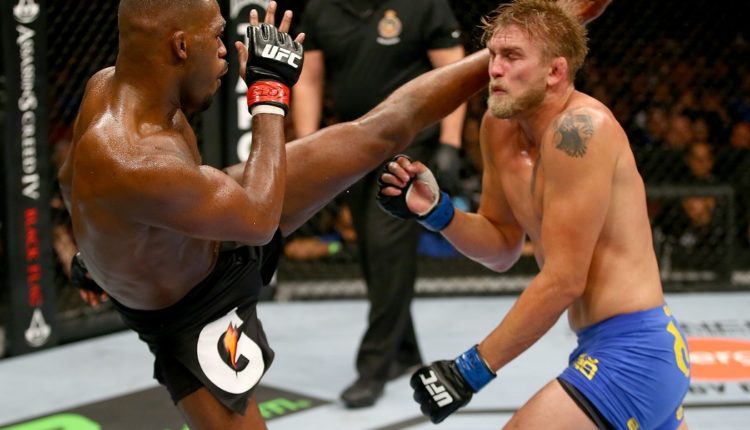 Jones Wants Gustaffson, But Not in NYC

While the fight with Lesnar is on the forefront of his mind, that fight may not be able to be set up until after April 2018, which means Jones needs an opponent sooner rather than later.  Jones already has wiped out most of the elite in his weight class, but Alexander Gustafsson may be next. Gustaffson gave  Jones his toughest fight to date when the pair had the 2013 “Fight of the Year” at UFC 165, and while no decision has been made, the champion wouldn’t mind a rematch.

“I know how important it is to never underestimate anyone. I get up for every one. I think the Gustafsson fight is an option for us right now. We’re just going to wait and see. We’re weighing our options right now.”

The pair was scheduled to rematch at UFC 178 in September 2014, but Gustafsson suffered an injury and was replaced by Cormier.  Gustafsson is riding a two-fight winning streak against Glover Teixeira and Jan Blachowicz, and wants to his long awaited rematch with Jones.

The UFC has five more pay-per-view events remaining on the 2017 calendar, but don’t expect the New York native to fight at the “World’s Most Famous Arena.”

UFC 217 takes place Nov. 4 in New York City. Jones said like most fighters, once had dreams and aspirations of fighting at Madison Square Garden, but over time those apparently have fizzled.

“To be honest, I love being from New York, but my whole thoughts and dreams of fighting in New York – they’re kind of starting to fade,” Jones said. “Looking at it from a business standpoint, it’s not a really good idea to pay 9 percent to the state of New York off the top just for fighting here. With 9 percent of every $1 million, that will add up real quick… I realize people from all over the world are going to watch it, whether it’s in Vegas or Canada or wherever. It would have been great to be the first person to fight at Madison Square Garden, but now that it’s happened and everything … I want to do it eventually, but it’s not something that’s a dream the way it used to be.”

Garbrandt To Fight Dillashaw At UFC 217 At MSG