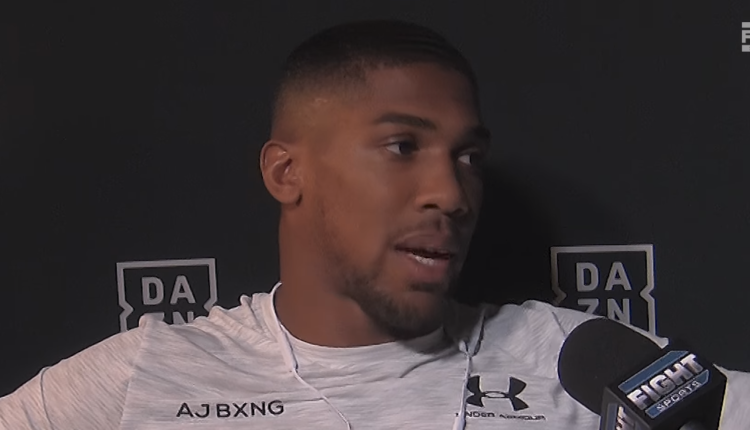 In the lead-up to their heavyweight championship rematch in Saudi Arabia, Andy Ruiz Jr. has claimed he wasn’t hurt much by Anthony Joshua despite getting knocked down.

The pair met back on June 1 with Joshua entering New York’s Madison Square Garden as the undefeated champion, and Ruiz a short-notice challenger. Joshua sent Ruiz to the canvas in the third round and attempted to finish him off upon the resuming of action.

“He was definitely hurt,” Joshua told Sky Sports. “You don’t go down unless you are hurt. It’s such a difficult thing to say when you’re fighting, because the adrenaline is high. A car probably could have gone into both of us, and we would have found a way to get up. I got put down four times, and got up.

Instead of finishing the fight, however, Joshua was knocked down twice in the round himself after Ruiz turned the tide with a perfectly-timed counter. Ruiz then dropped Joshua two more times in the seventh round before the fight was called off.

Claims have been made that Joshua quit in his corner after returning to it and staying there despite answering the referee’s questions. Joshua, however, says what some thought of his body language and the reality of the situation were two different things.

“The only reason I didn’t walk out into the middle of the ring was because my gum-shield wasn’t in,” Joshua said. “I was waiting for the referee. He said: ‘Are you ready to fight?’ I said: ‘Yes’. I was waiting for him to put my gum-shield in my mouth. But he waved off the fight. Was I hurt? Not to the point where I couldn’t get up and stand on my feet. Was he hurt? Not to the point where he couldn’t get up. But he was hurt enough that he felt that punch, for sure.

“I’ve got to learn from that situation, to be more responsible. Don’t leave it for the referee to take responsibility. Take care of that situation. I don’t think that I didn’t want to fight on, because I wouldn’t have got up. I would have stayed down. I was waiting for him to put my gum-shield back so I could continue to fight. Next time I will take more responsibility and say: ‘I’m ready, ref, my gum-shield is in so let’s go’. That’s how I will deal with it, next time.”