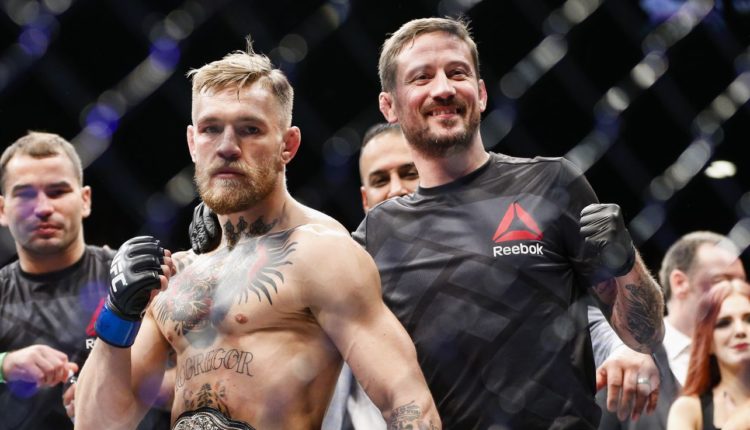 Kavanagh: Conor And Diaz Should Be Next

The head coach of Conor McGregor, John Kavanagh prefers Nate Diaz as the person to face off McGregor for his next fight, which he said might not take place until 2018.

In a recent column for The42.ie, an Irish publication, Kavanagh said he feels a proposed trilogy with Diaz is the most exciting option, yet it seems a fight in 2017 may be out of the question.

“It’s probably a little late in the day to realistically expect another fight before the end of the year… Even after this hiatus is over, a lot goes into planning and execution of a training camp at our level.”

Prior to McGregor’s fight with Mayweather, UFC president Dana White said McGregor planned to fight again this year. The final date on UFC’s 2017 schedule is December 30th in Las Vegas.

McGregor was medically suspended by the Nevada State Athletic Commission for two months following the loss to Mayweather, which is not unusual following a TKO loss.

The Dublin native is the UFC’s current lightweight champion. He won the title by knocking out Eddie Alvarez at UFC 205 in November, he has not defended his title or fought inside the octagon since then.

The UFC has booked an interim lightweight title fight between Tony Ferguson and Kevin Lee on October 7th at UFC 216 in Las Vegas. The winner of that fight would be considered to be the one to fight McGregor next.

McGregor, however, has long expressed interest in a third fight with Diaz, who submitted him when they first met in March 2016. McGregor went on to win a majority decision in the rematch.

McGregor has stated their third fight must take place at 155 pounds, instead of 170 which was the weight the two fought at in their first two fights.

“To be completely honest, I didn’t actually know who Kevin was until very recently,” Kavanagh said of the Lee-Ferguson bout. “Tony is a solid fighter, but he doesn’t have the kind of appeal that would get your blood racing, particularly in the context of coming from the excitement of the Nate Diaz rematch, the historical significance of beating Eddie Alvarez at Madison Square Garden and the novelty of facing the greatest boxer of his generation… This is all accompanied by the caveat that it’s merely the opinion of John Kavanagh, but I’m sure people will be able to relate to my perspective on the situation.”

Diaz hasn’t fought since the second bout with McGregor, in August 2016.