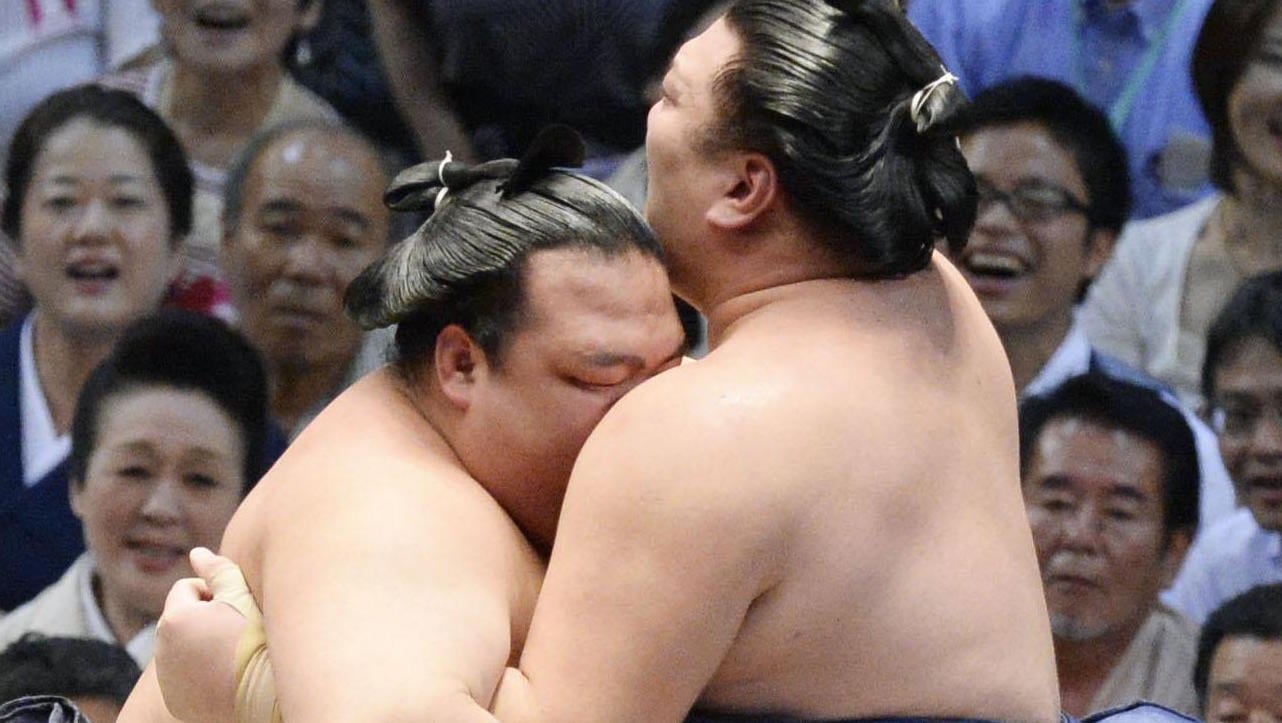 NAGOYA – Kisenosato got his yokozuna promotion campaign back on track with a well-earned win over maegashira Ikioi on Wednesday, the 11th day of the Nagoya Grand Sumo Tournament.

Mugged by Shohozan on Tuesday, Kisenosato bounced back at Aichi Prefectural Gymnasium, but the Tagonoura ozeki had his work cut out for him against his fourth-ranked opponent.

Kisenosato had Ikioi (4-7) teetering on the edge of the ring after setting himself up for the kill. Ikioi spotted an opening and launched a counterattack, but Kisenosato read it well and bellied him over the edge of the dohyo.

Kisenosato, who is aiming to become the first Japanese-born yokozuna since Wakanohana in 1998, remained in a tie for the lead at 9-2 with Mongolian yokozuna pair Hakuho and Harumafuji and komusubi Takayasu.

Hakuho, winner of the Spring and Summer meets, got both arms around Brazilian sekiwake Kaisei (6-5) and bundled him out for a convincing win before Harumafuji brought the day’s action to a close in a flash, taking down seventh-ranked Ichinojo (7-4) with a routine uwatenage overarm throw.

Takayasu escaped the clutches of Takarafuji (8-3) and got a firm left-handed grip on his belt before knocking the second-ranked maegashira from the leading group with a textbook uwatenage throw.

Elsewhere, Terunofuji moved within two wins of the eight he needs to secure his ozeki status for the next tournament in September with a quick-fire victory over No. 5 maegashira Yoshikaze (7-4).

The Mongolian behemoth was quick off the mark, reading a sloppy attack by Yoshikaze at the tachiai and easily slapping him down to the dirt.

Ozeki Goeido (6-5) was forced out by fifth-ranked maegashira Shodai, who secured a winning record at 8-3.

Fighting with pride on the line after being saddled with a majority of losses on his sekiwake debut, Georgian grappler Tochinoshin improved to 3-8 with hard-fought force-out win over top-ranked maegashira Mitakeumi (2-9).

PFL Announces Location For Events In 2021

David Benavidez On Jermall Charlo: ‘He Better Back Those Words Up’

Boxer Misses Weight By Over 40 Pounds