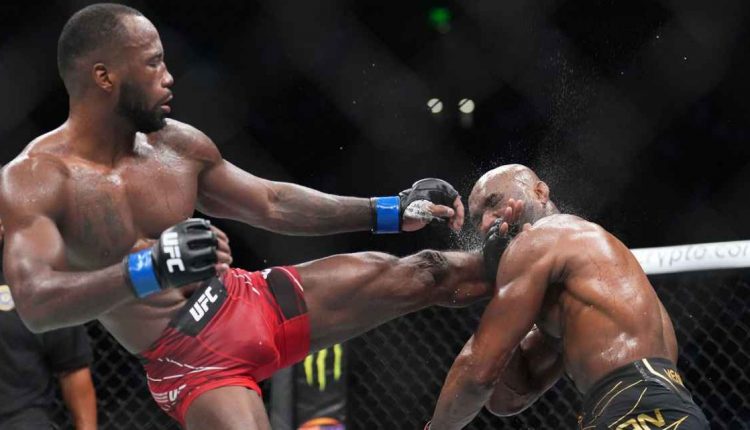 Kamaru Usman was en route to another win.

But it seems this time around wasn’t meant for him — Leon Edwards got his revenge.

Edwards shocked the MMA community last night when he knocked out Usman — the longtime defending welterweight champion — with a head kick in the final round of UFC 278.

It’s more for the people that grew up where I grew up,” Edwards said.

The kick heard ’round the world 🌎

Usman was dominating a majority of their second fight and was ahead on all three judges’ scorecards heading into the fifth round.

But with just a minute left, Usman tried dodging a hit from Edwards on the left and Edwards caught him with a head kick that made the crowd go wild.

Usman was on the verge of tying Anderson Silva’s longest UFC winning streak. The “Nigerian Nightmare” was also ranked at the top of UFC’s pound-for-pound list for quite sometime.

Usman won their first fight in December 2015 by unanimous decision.

Usman was taken to a hospital after the fight, but he tweeted afterward:

“Champs f— up sometimes … but we bounce back and come with vengeance!!”

In the co-main event, Luke Rockhold and Paulo Costa held war. It was evident that Rockhold got tired in the first round, but even though he hardly kept his hands up, he had the kicking and punching power until the last seconds.

Costa tested his chin in each round. Rockhold lost by unanimous decision.
He then announced retirement.

Costa is on a winning streak now and will likely be back in the title run.
Merab Dvalishvili served defeat to legendary Jose Aldo.

Still, Dvalishvili was controlling the Brazilian in the clinch and also won some exchanges in the final rounds, so he earned a unanimous decision victory with 29-28, 29-28, 30-27 on the judges’ scorecard.

Check the rest of the results down below:

How To Watch Collision 4 In Your Country