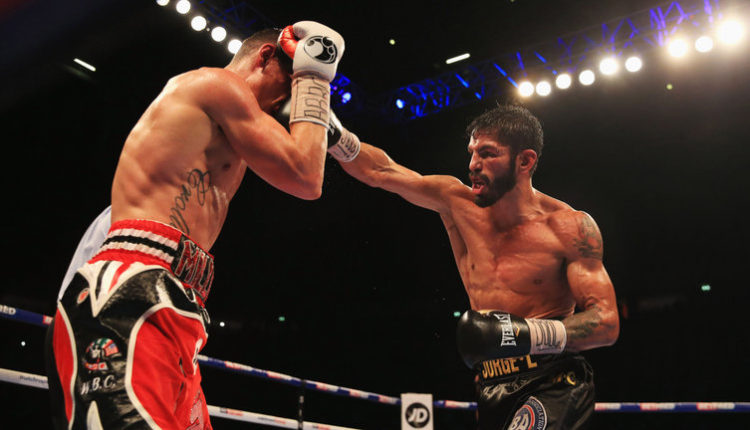 It did not take long for Golden Boy and the California Atheltic Commission to lay the hammer down on Jorge Linares.

Just a few hours after it was revealed that Linares tested positive for COVID-19, his fight with Javier Fortuna on August 28 was officially nixed. ESPN was the first to report the bombshell. Linares is asymptomatic and was supposed to receive a test within ten days.

“He’s feeling OK,” manager Jose De La Cruz stated. “He’s got symptoms, he’s at the hospital, he can’t leave for 10 days. It’s a nightmare for everyone.”

Linares (47-5) last fought in February, knocking out Carlos Morales for his 29th win via some form of knockout. “The Golden Boy” won the WBC Featherweight Title from Oscar Larios in 2007 and the WBC Lightweight Title in 2014 against Javier Prieto. During that time he became WBA and The Ring Lightweight Champion, defending those belts three times before losing it to Vasiliy Lomachenko in 2018.

Golden Boy is looking to keep the fight card inside the Fantasy Springs Resort and Casino in Indio, California alive, according to ESPN. They would need to find a new opponent for Fortuna, who agreed to face Linares instead of a Matchroom Boxing bout.

Fortuna (35-2-1) was supposed to face off against Luke Campbell before COVID-19 nixed those plans. Originally set to compete for the interim WBC Lightweight Title against Cambell, Fortuna chose to fight Linares. Now, Campbell will face Ryan Garcia for the opportunity to face Devin Haney.

Golden Boy recently returned during a time when Top Rank took over Las Vegas. Several of the latter’s promotion’s events had to be altered due to fighters testing positive for COVID-19.

Stay tuned, as more information should be revealed regarding the potential replacement for Linares.