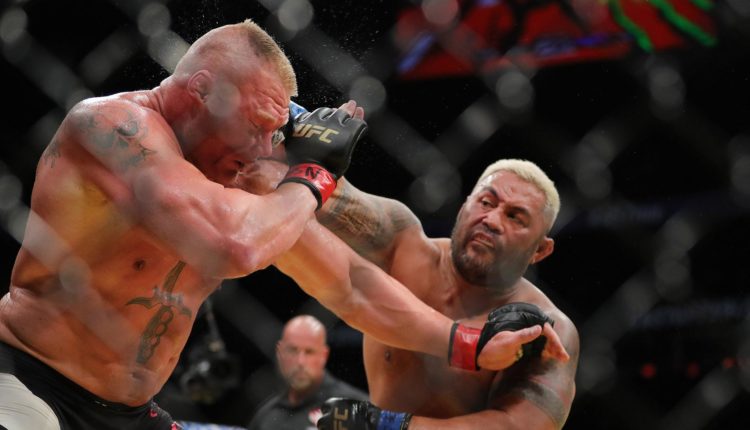 Mark Hunt: I Don’t Mind If I Die Fighting

In a very haunting piece penned Wednesday for the blog, Players Voice. UFC heavyweight Mark Hunt discussed the adverse effects of his career as a fighter, and why he speaks out against anyone who is caught using performance enhancing drugs in MMA. Hunt claims that he is already starting to see the negative effects of fighting and that some of the damage he has taken came from men cheating the system isn’t right.

“I will probably end my life fighting… I’ve been fighting since I was a child, fighting to get out of my circumstances. I used to make $300 a week, struggling to put food on the table but I have become one of the highest-paid fighters in the world. I feel that’s destiny. This is what I’m supposed to be doing and if I die fighting, that’s fine. I just hope that if it does happen, it will be in an honest and fair competition… My body is f**ked but my mind is still here. I’ve still got my senses about me and I know what’s right and wrong, which is the main thing. Sometimes I don’t sleep well. You can hear me starting to stutter and slur my words. My memory is not that good anymore. I’ll forget something I did yesterday but I can remember the s**t I did years and years ago. That’s just the price I’ve paid – the price of being a fighter. But I’ve fought a lot of drug cheats and copped a lot of punishment from guys who were cheating and that’s not right.”

Hunt first spoke out regarding PEDs and other banned substances in MMA after his fight with UFC 200 fight with Brock Lesnar. Lesnar would test positive following his victory over Hunt for hydroxy-clomiphene and received a one-year suspension. Of the 24 different men Hunt has faced in MMA, nearly half of them (10) have been connected to the use of banned substances, through drug testing or self-admission. Hunt’s combined record against those involved at even 5-5-1, with his loss to Lesnar being overturned into a no-contest. With that in mind, it’s not hard to see why Hunt believes his career has been irrevocably impeded as a result.

“I’d be champ already if it wasn’t for the cheaters. I’d probably be retired, sitting at home playing video games all day, eating KFC. These guys couldn’t cut it with me if they weren’t cheating. I’ve missed out on sponsors and millions of dollars. It pisses me off when I think about it. If you take away all my fights against juicers, it would probably be half of my fight record gone. I paid my way to the top with blood and sweat, these guys had to enhance themselves to get here… Everyone says the first Bigfoot fight is one of the greatest heavyweight bouts of all time, but not for me. It’s stained. That guy ruined everything. You take away his juice and he’s nothing. The first fight we had, we nearly killed each other. The second fight, when he was clean, he didn’t even last a round. He wasn’t the same person as the one that almost frigging killed me.”

“The Super Samoan” is currently suing the UFC, Lesnar, and Dana White over UFC 200, but it’s clear Hunt takes issue with the organization on other grounds as well, one being the pay structure in the UFC.

“It pisses me off when some fighters say, ‘It’s great to be part of the UFC, it pays the bills’. It doesn’t. That’s coming from one of the highest-paid fighters in the world. These guys don’t get paid jack s**t. For someone that makes $200,000-$300,000 a fight, half of that goes to tax and half again is for their camp. Then whatever’s left they’ve got to use for their mortgage. If you’ve worked your arse off to get in the top ten, you should be getting paid properly… Even the champion, Stipe Miocic, is asking for more money. How the hell can the champion of the world be asking for a pay rise? Gegard Mousasi is another one. He moved to Bellator and it’s because these guys aren’t getting what they’re worth and they don’t know what the company is making off them.

At 43 Hunt is the oldest fighter currently still competing in the UFC,  and isnt ready to walk away until he has won the championship he claims has been denied to him by those who cheat the system.

“Whenever I start something, I try to finish it. I’ve got three fights left. I want to win that world title. It’s a dream of mine to be a mixed martial arts world champion. I’ve been the best fighter in the world at kickboxing – they can’t take that away from me – but when I started in MMA I realized how great this sport is. It’s the ultimate combat sport and that’s why I want to be the world’s best at it… I’ve come close. I had my title shot in Mexico – I didn’t cut it but the circumstances weren’t right. I’m number six in the world right now and I feel I can do it in three fights. I’m still one of the best fighters on the planet. I honestly don’t care what anyone says. I’m knocking fools out. I’m beating guys because that’s what I was born to do. Twenty seven years of fighting, 16 years at the top of two different sports – the oldest fighter on the planet and still going.