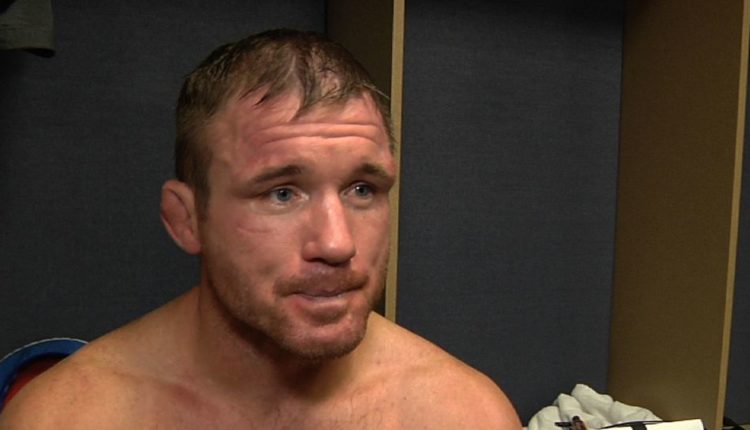 Former UFC champion Matt Hughes has been ordered to stay at least 500-feet away from his wife, following claims that he physically attacked her multiple times.

In a report from TMZ, the former fighter’s wife, Audra, has gained a restraining order after Hughes’ allegedly began a patter of abuse and violence dating back to 2017.

The abuse alleged to have started in the fall of 2017, months after Hughes was hit by a train after his truck was stuck on the tracks near his home in Missouri.

Mrs. Hughes claims that the fighter demanded the keys to his truck while she was in the shower, but was told numerous times that “he can’t have them because he shouldn’t drive due to his DAI (brain injury).”

From there Hughes choked her and demanded the code to his gun vault, when she refused he smashed her head against the shower wall and “This is what choking is” while tightening his grip.

A second incident occurred in July 21st of 2018 when Hughes threatened to shoot his wife, following her taking his phone due to claims of “communicating with multiple women.”

The issue worsened on December 12th of the same year when Hughes struck Audra in-front of their son, daughter, and step-father following similar accusations of texting other women.

The former welterweight champion has also had a restraining order filed by his twin brother and fellow former MMA fighter, Mark.

Hughes’ brother claims that Matt had not only attacked his son, but attempted to set a tractor on fire.

The two brothers had fallen into a disagreement over which of the two was the owner of the tractor in-question, and on September 23rd, Mark’s 15-year-old son was behind the wheel, causing Hughes to grab his nephew and tell him that it was his “f*cking tractor.”

A week later on September 30th, Mark Hughes alleges that Matt Hughes doused the tractor and a surrounding area in gasoline, attempting to destroy the vehicle.

The following day, Mark filed and was granted a restraining order, that would force Matt Hughes to stay away from his brother and family.

Hughes, a recent subject of a UFC 25th Anniversary documentary on his career and life leading up to and after his train accident, is a former two-time UFC welterweight champion.

Maycee Barber: “I’ll Be Bigger Than Conor Or Ronda”