Pound-For-Pound Striking Queen Meksen Fights on ONE on Prime Video 2.

One of the absolute best female Kickboxers in the world, former quadruple Glory Kickboxing World champion Anissa Meksen faces Daokongfah Banchamek after two straight victories in her ONE Championship journey. Meksen is set for her third appearance in the ONE circle after dominant wins over Cristina Morales and Marie Ruumet.

FIGHT SPORTS brings you an exclusive interview with the French-Algerian fighter before the clash with Banchamek on October 1st.

Banchamek and Meksen will square off at ONE on Prime Video 2 on Friday September 30th in a Muay Thai fight. 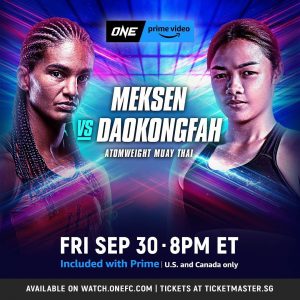 It is exactly one year ago, that Meksen made her ONE Championship debut against the former Enfusion Kickboxing World champion Christina Morales, whom she dominated from the first bell. The Atomweight Kickboxing showdown ended in the second round with Meksen adding another knockout victory to her stellar record.

At ONE 156: Eersel vs. Sadikovic, April 2022 Meksen fought Marie Ruumet in a Muay Thai bout, where Meksen wore the Estonian fighter down over three rounds, earning her a convincing unanimous decision. At a post fight interview Meksen called out ONE Championship Atomweight Kickboxing World champion American Janet Todd. It will be interesting to see, if the two elite strikers will get the opportunity to do battle in the round circle in the future.

First things first though: Meksen now focuses on the Thailand champion Daokongfah Banchamek, who is debuting at ONE on Prime Video 2. Banchamek is no stranger to the roster at ONE Championship having beaten the current ONE Championship Atomweight Muay Thai World champion, Allycia Rodrigues, back in 2020.

Throughout 2020 Daokongfah went unbeaten in seven fights and on December 11th 2021 she won the prestigious WBC Muay Thai World title in the Super Flyweight division. In 2022 she represented Thailand at the Sea Games.