Meksen has repeatedly stated that she wants to fight under MMA rules. 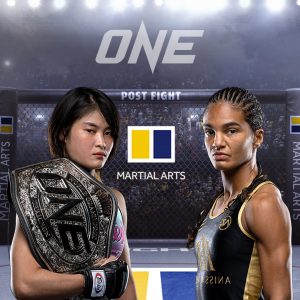 Meksen will be featured in an exclusive interview on FIGHT SPORTS before she goes to war at ONE on Prime Video 2, September 30th, in Singapore. She is facing Daokonfah Banchamek, which we reported here.

Stamp is the former ONE Super Series Atomweight Kickboxing and Muay Thai World Champion. According to the ONE Championship website, Stamp knew that she wanted to compete in Muay Thai since she was 5 years old. Her first taste of Muay Thai was at her father’s gym, where she started practicing Muay Thai for self defence.

Stamp is extremely competitive though, and only about a year after she started out in Muay Thai, she made her first appearance in the ring: Stamp won her debut by knockout in less than 30 seconds.

She has close to hundred fights at the young age of only 24, and trains alongside the male world champions at the Fairtex Camp in Pattaya, Thailand.

Meksen is no stranger to the readers of FIGHT SPORTS, as we have profiled her here. She has fought in Savate, boxing, Kickboxing, Muay Thai, K-1 rules Kickboxing and has repeatedly expressed the desire to fight under MMA rules too.

Both athletes are extremely technical, versatile, well conditioned AND experienced. However Stamp has 10 MMA fights with 8 wins, whereas Meksen hasn’t fought in MMA (yet).

It will definitely be an explosion of a battle featuring two of the absolute elite strikers on the planet!