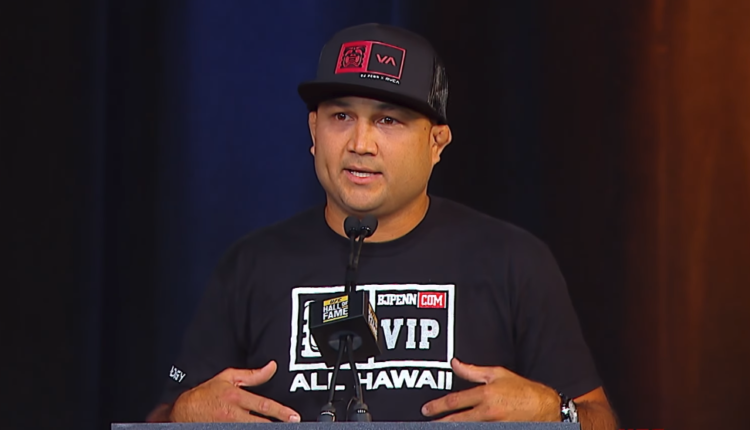 A public records request conducted by MMAJunkie has revealed that UFC Hall of Famer B.J. Penn is facing a charge of first-degree terroristic threat in his native Hawaii.

The alleged incident took place in January 2018, and Sergeant Jason Grouns of the Hawaii Police Department said that the case remains open 15 months later because “all parties involved have not been located (or) contacted yet, and it cannot be routed to the prosecutors until complete.”

The incident was allegedly over a property access dispute in Waipio Valley, where Penn has a training facility next to the alleged victim’s taro farm. According to the incident report, Penn allegedly went to the man’s property with a machete, demanding he come out. The man hid, fearing for his life, and Penn responded by striking the ground with the machete and “stating he was going to kill him.”

Penn then reportedly returned on an ATV, damaging an entry gate, while the victim “feared for his life so he left the area.”

Penn family attorney Gary Levitt was reportedly shocked to find out about the charge, though he claims Penn acknowledges a dispute over the property.

“B.J. said he’s never given a statement to the police; they haven’t told him he’s got a terroristic threatening charge, or there are charges pending,” Levitt said. “He just said there was an incident, it was over one year ago, and it had to do with a gate. There was no threatening or machete or anything like that.”

Earlier this month, the mother of Penn’s children filed a restraining order against the former two-division UFC champion, alleging years of abuse. The next court date for this matter is scheduled for June.

The UFC has not commented on the matter. Penn is scheduled to compete at next month’s UFC 237 event against Clay Guida.

Allen Gets Third-Round KO of Browne