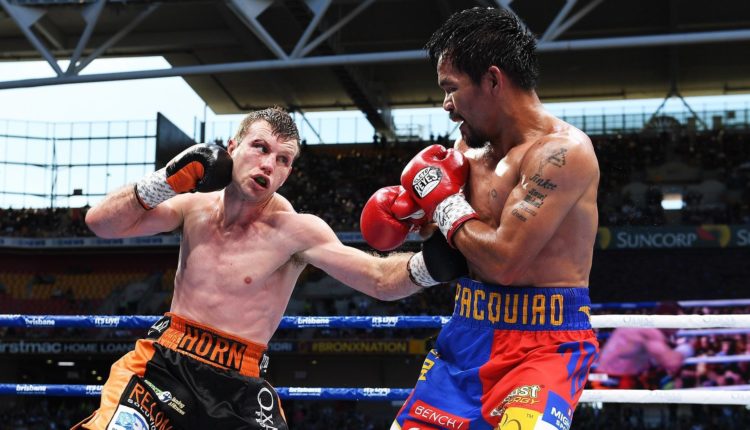 Freddie Roach  was talking about 37-year-old Miguel Cotto boxing 29-year-old Sadam Ali on Saturday night at Madison Square Garden, in Cotto’s final fight and Roach said he may have to prepare another older fighter against a younger rising star.
Roach told reporters following the final press conference for the Cotto-Ali fight that Bob Arum wants to make a Manny Pacquiao-Terence Crawford fight in 2018. Up until recently, Arum was reluctant to match Pacquiao, who’ll turn 39 in December, against the 30-year-old Crawford, presumably because the highly skilled Crawford would’ve presented a troublesome style for Pacquiao.

Roach said “they’re pushing for it” now, but didn’t specify when or if Pacquiao-Crawford could take place.

That may change if Jeff Horn defeats England’s Gary Corcoran on December 13th in Brisbane, Australia, Crawford is expected to challenge Horn for the WBO welterweight title sometime early in 2018.
Crawford, a former undisputed 140-pound champion, is the mandatory challenger for Horn’s title. Horn won a shocker against Pacquiao in a  controversial 12-round unanimous decision for the WBO welterweight title July 2 in Brisbane, Horn’s hometown.
Pacquiao , a senator in the Philippines, has been busy with his political responsibilities recently and hasn’t fought since Horn beat him.
“Arum wants Pacquiao to fight Crawford,” Roach said. “I’m a little bit concerned about that fight.”

“It’s a tough fight. Crawford’s a young guy, coming up and so forth, and Manny probably has seen his best days behind him. But I will still train him and get him ready for that fight, if that does happen. And they’re pushing for it, so it might. But it’s the same situation there. It’s a different generation. We’ve gotta still compete with the younger generation. And I think Miguel will be able to do that, for sure.”

Despite Pacquiao’s age and declining skills, Roach still thinks he can defeat Crawford, who’s typically considered one of the top two boxers, pound-for-pound, in the world.
“I would never go into a fight not thinking we can win,” Roach said. “So by the time we get ready for that fight, we will be a hundred-percent ready to win.”