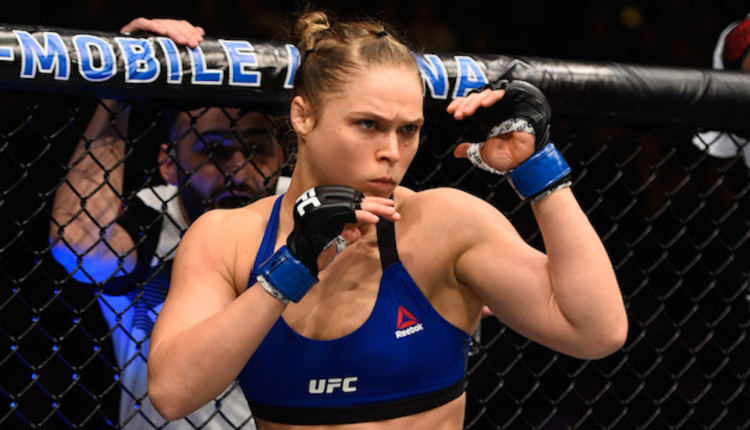 Rousey: MMA ‘No Longer A Priority’

It has been a long time since Ronda Rousey stepped inside the UFC octagon, or an MMA cage for that matter. Following her TKO-loss at the hands of Amanda Nunes at UFC 207 in 2016, Rousey left the MMA world behind. She starred in more movies and had a brief stint in pro wrestling, winning the WWE Women’s Championship in 2018.

Recently, Rousey (12-2) has been hosting a YouTube channel on her farm that features a variety of personalities. On her latest show, she spoke to Steve-O about a number of topics. Usually not one to go on about MMA, Rousey candidly spoke about the sport, and if she would ever go back to it.

“There’s not a day that goes by people aren’t telling me to fight,” Rousey stated, via MMA Fighting. “I have to try and think of it as, would I rather be the greatest of all time, or have everybody think I’m the greatest of all time? It used to be so important to me to have both. But now it’s got to the point where I don’t want to sacrifice myself and my family to prove that anymore to a bunch of people that don’t give a sh*t about me.

“I know, and the people who love me know. It’s no longer a priority in my life. All the people that tell you, ‘Come on, fight again, do this again,’ they would never do that for me,” Rousey continued.

Rousey was on top of the world when she went from Strikeforce to the UFC in 2013. Dana White, who once said women would never fight in the UFC, cemented Rousey as the golden girl of the promotion. He gave her the UFC Bantamweight Championship and promoted her to the moon. She dominated opponents like Miesha Tate, Cat Zingano and Liz Carmouche. The fight game dominated her life. It wasn’t until husband and former MMA fighter Travis Browne spoke to her that she put things into perspective.

Her world came tumbling down when she was decimated by Holly Holm at UFC 193 in Australia. The first time she showed a sign of weakness, Rousey was never the same. It could be seen during the aforementioned Nunes fight. Before and after the Nunes fight, Ronda never could talk about losing, and how everything, from media to fan support, went down.

“That’s something I really had to deal with stepping away from the UFC was finding my identity without it, because I got so lost in it,” Rousey said. “It’s tough, because you’re with these people and you’re like, ‘Oh my god, I got to live this journey with you, this is amazing’ and then you see some of these Bellator fights and you’re like, ‘Oh my god, this person’s still going?’ I can’t watch it. It makes me sad.”

Rousey entered the UFC Hall of Fame in 2018, the first woman to accomplish the feat.