The 22-year-old announced his decision to make a comeback in a social media post. His post’s caption indicated that the young boxer had been struggling with severe mental health issues. 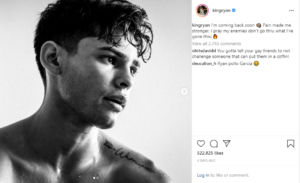 Garcia last fought Luke Campbell in January, clinching his 21st professional win with a perfectly-timed body shot at the American Airlines Center in Dallas. He was scheduled to fight Javier Fortuna on July 9, but he withdrew from the fight on April 24 just two weeks after the match-up was made official.

The California-born boxer wanted to take some time off to manage his health and wellbeing, confirming that he will return to the sport once he becomes his “healthiest self”. 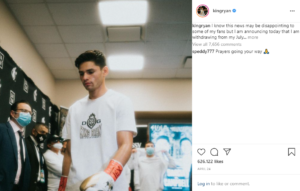 Garcia has been open about his mental health in the past. He had revealed that he suffered anxiety and panic attacks during his teenage years.

On the work front, the boxing prodigy has a staggering 21-0 record accompanied by such performances that might make him one of the best lightweight boxers of the era by the time he hangs his gloves.

Where To Watch: Anthony Joshua Vs. Oleksandr Usyk Tonight

Where To Watch: Anthony Joshua Vs. Oleksandr Usyk Tonight

Where To Watch: UFC 266: Volkanovski Vs. Ortega Tonight