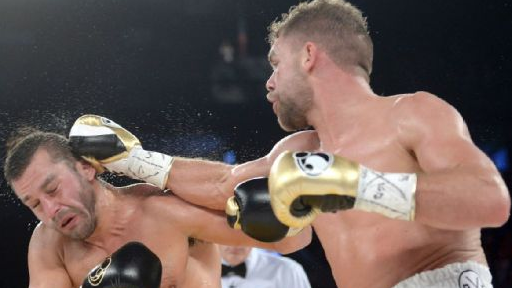 For fans of Logan Paul and KSI, they really won’t care who Billy Joe Saunders is, let alone who he is facing, but this is the gambit set by promoter Eddie Hearn for Matchroom’s return to Los Angeles in November.

Saunders will defend his WBO super middleweight title on November 9th, against a yet to be announced opponent, on the undercard of the two YouTube megastars fighting under professional rules and set at a cruiserweight weight limit.

“The WBO top-15 is very thin so we have some other fights in consideration,” Hearn said when looking for quality opponents to fight Saunders. “We looked at Australians and Germans but, in America, it is not the same.”

“Billy is going to be doing build-up media stuff with KSI and training videos, they usually get a million views,” Hearn said. “I would get 30k-40k to do anything like that on Sky Sports 1.”

“I have seen a lot of professional fights that look like they are between two white-collar fighters,” Hearn said of those doubting the potential entertainment value of the two multi-millionaire vloggers fighting sans headgear. “Some of the international opponents I have had to bring over from Eastern Europe have been 10x worse than these two fighting.

“They are fit, professionally trained and have done it before. There is an element of danger now because it is 10oz gloves and no headguard but I think that is where a lot of the interest comes from. “They took so many punches last time with headguards and big gloves on, that will not happen this time. I am pretty sure someone will get knocked out in the KSI vs Paul Logan fight but I am sure that is what people want to see but that’s we have made them undergo professional medicals and medically approved.

“I saw them last week they are in great shape and I believe someone will get knocked out in this rematch,” Hearn continued. “These guys are going to take risks and chances but they have hardly got any respect for stepping through the ropes. If I was walking out in front of 20,000 people I would be shitting myself.”

“They don’t know what they’re letting themselves in for and once they get hit, all the training will go out of the window. DAZN will get 500,000 subscribers… Who knows where this is going to go? I would like to tell you this is a one-off, but ask me on November 10.”