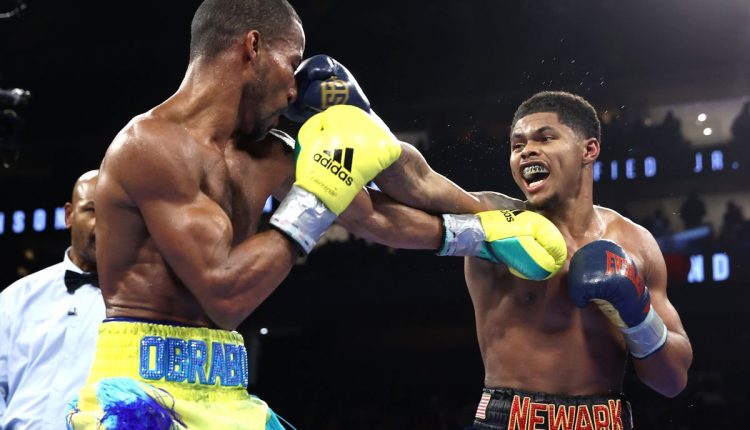 It was a sweet homecoming.

Shakur Stevenson dominated Robson Conceicao in a Top Rank/ESPN main event Friday night, winning it all by 12-round unanimous decision.

The 10,107 crowd roared and roared for Newark’s “hometown hero” while Conceicao got the short end of the stick and was immersed with boos.

The crowd kept it loud for round one. Conceicao threw the first few punches. After feeling each other out, Stevenson landed a good one that made the crowd talk and Conceicao take a step back.

In the second round, Stevenson continued to plant strategic shots to his opponent’s face and body while Conceicao tried to get him from the side on the body. Every time Stevenson landed a good shot that made the crowd vocal, he would nod his head.

By the third round, the slow pace was out the door. Stevenson and Conceicao traded punches but this time, the Brazilian seemed to get a few good ones as a portion of the crowd yelled. Stevenson landed an uppercut that forced Conceicao to clinch.

Stevenson started to feed off the energy of the crowd and landed a few more but Conceicao tried keeping distance with his left glove.

Stevenson was quick. He was out landing Conceicao at this point.

Stevenson kept the power punches coming, which was later credited as a knockdown.

Conceicao didn’t seem to give up yet as he landed a left in the fifth round. But Stevenson didn’t take long to hurt Conceicao again and force him to clinch.

Conceicao defended but Stevenson continued to find openings straight to his face. Conceicao began to swell a little. The crowd booed as Stevenson was shoved to the ropes.

In the sixth round, Conceicao tried replicating Stevenson power punches but it wasn’t enough. Conceicao was wobbly and leaning. The referee gave Stevenson a warning that the crowd didn’t agree with.

Conceicao landed combinations but it was quickly overshadowed by two of Stevenson’s hard left hands.

In the seventh round, Conceicao fell to the mat face first, but it wasn’t called a knockdown. Stevenson kept landing punches on the inside and cornered Conceicao to the ropes, but he escaped.

Conceicao held up in the eighth round and even forced Stevenson to the ropes. The Brazilian began to press, but it wasn’t too long until Stevenson made the crowd cheer by landing a punch that forced Conceicao to turn backwards.

In the ninth round, a point was deducted from Stevenson after Conceicao tried to clinch and hung his arm on Stevenson’s shoulder, which the latter forced off of him causing his opponent to hit the mat.

The crowd began to cheer “F— him up!”

In the tenth round, Conceicao clinched Stevenson to the ropes who was facing the crowd with a smile. Just as the crowd quieted down, Conceicao went to the floor again, but it didn’t count as a knockdown.

It was the second to last round. Stevenson landed a straight left to the face that stunned Conceicao. Stevenson then landed a punch that made his opponent stumble forward to the corner. Stevenson taunted with his tongue out.

In the final round, the “F— him up” chants started again. Stevenson hit the mat but it was a slip.

It was clear that Stevenson was eyeing the knockout, but it never came.

Despite the win, the WBO and WBA super featherweight titles are still vacant because Stevenson came in nearly two pounds overweight. But Stevenson assured his fans on social media that he will be moving to the lightweight division in his next fight.