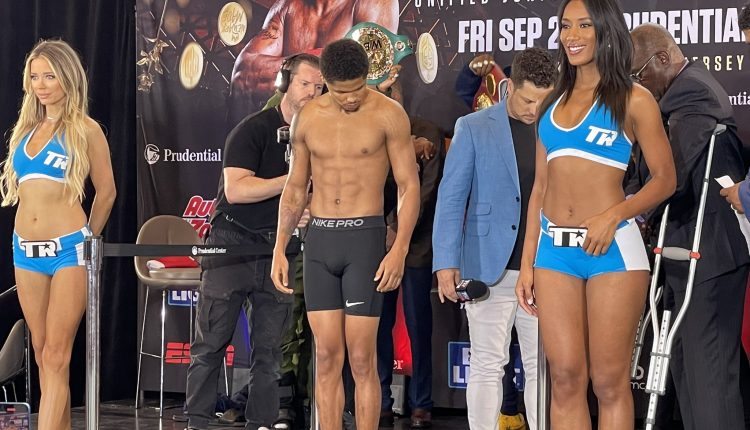 UPDATE (9/22/22 3:38 pm ET): Shakur Stevenson has failed to make weight after the additional time. He will be forced to relinquish his two 130-pound belts and will be fined and likely forfeit some of his purse he is set to receive. He is expected to earn $3 million, ESPN’s Mike Coppinger reported.

Shakur Stevenson has less than two hours to make weight.

Stevenson weighed in at 131.6 pounds, which is 1.6 pounds over the contracted weight limit. His opponent, Robson Conceicao, made weight at 129.6 pounds.

The two boxers still went ahead with the traditional face-off, but were still unable to peel away from each other when instructed to.

Under ESPN’s Bernardo Osuna tweet of the news, people responded with “Time to move up?”

Stevenson has previously said that he doesn’t plan on staying in the 130-pound weight limit much longer.

“It all depends on the weight cut at the end of the day,” said Stevenson during an interview with Thaboxingvoice earlier this month.

“I done (did) amazing things at 130-pounds already. My last two fights to be specific, I done put on shows and I done did a lot at the weight, so if I struggle with the weight cut and it be hard on me, I think I’m going up to 135. Tell them boys get ready.”

Stevenson and Conceicao’s main event is still expected to go on Friday night at the Prudential Center in Newark, New Jersey.

Eddie Alvarez Parts With ONE Championship, Is Free Agent Again

Amanda Serrano vs. Erika Cruz: Fight Details And Everything You Need To Know